A man has gotten himself in deep trouble after he was caught red-handed with a pistol in a community in Niger. 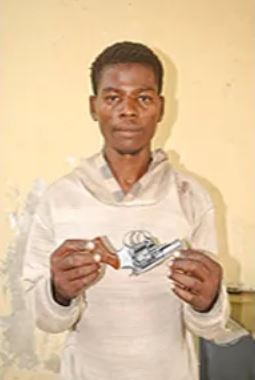 According to a report by NewTelegraph, police have arrested a 24-year-old man, Samaila Lawal, of Mashegu Local Government Area of Niger State for unlawful possession of firearm.

The suspect, who was paraded yesterday, was said to have been apprehended for unlawful possession of a revolver pistol.

Lawal, who hails from Araba Ilela, Sokoto State, was trailed and apprehended by a team of police detectives attached to Ibbi Division in Mashegu, on a tip-off.

While the police were conducting an on-the-spot search, one revolver pistol was recovered from him.

The suspect told our correspondent that he bought the gun for self-protection, adding that he did not use it for any other thing.

He said: “I use the gun to protect myself; taking cognisance of the security threat in the country one is not sure what will happen in the next minute hence I bought the gun for self-defence.”

He said: “Police would no longer tolerate unlawful possession of firearms in the state and we have warned people to desist or face the wrath of the law.”