Boko Haram: On A Lonely Road To Maiduguri - A Journalist's Assessment


So, until we feel and see the presence of the military at every point during travels on that long stretch of road, we will not agree that their claims are right. 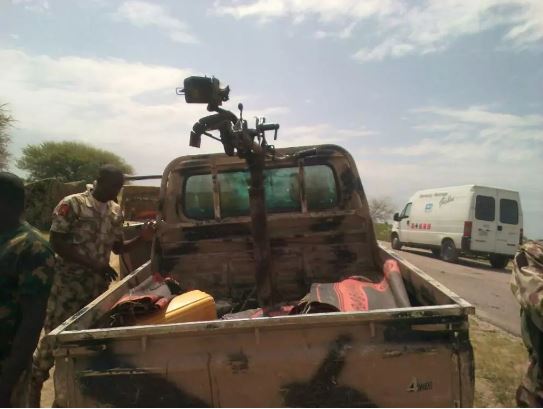 We cannot argue with the military concerning the state of the 75 kilometres road to Maiduguri, Borno state capital. Perhaps the way the military sees it is clearly different from the way it is for those of us who ply the road while holding unto prayer for God’s protection.

I have seen what gives me chills at some point when the military I come across along the journey just finished an operation and are looking murderous on the highway.

Sometimes I also come across the military preparing to engage the daily monsters on that highway and some other times the axis is quiet, deserted and lonely as would a graveyard at night.

The Maiduguri – Damaturu road knows our names – yes those of us journalists who ply the road, often in search of what to tell the world in our daily reports. Everyday has its own set of new experiences and like the military, we are prosecuting the war against insurgency. While the military battle the devils with arms, we fight the war with our pen.

But on whether or not the Maiduguri – Damaturu road is clear and safe as they would claim, we have a duty not only to entertain but also to inform, which is key on this occasion.

Going by the different accounts from people who constantly travel this road – the commercial drivers, our verdict in the attempt to inform has continuously conflicted with reports from our military.

So, until we feel and see the presence of the military at every point during travels on that long stretch of road, we will not agree that their claims are right.

Listening to travellers who arrived Maiduguri yesterday (Thursday) from their various destinations and driving through the 75 kilometres Benesheihk to Maiduguri road was a huge nightmare – a big gap differentiates those who imagine the horror from a distance and those who actually need the Big hand of God for protection while travelling.

The road was empty without the presence of security operatives, engines were running at high speed and prayers were being offered without discrimination to faith, as every said prayer was accompanied by an ‘Amen!’. In fact, a strong ‘Amen!’ Whether that prayer is being said by a Christian, Muslim, or a Pagan. It is still ‘AMEN!’ until Njimtilo, a location considered safe is at sight.

Njimtilo, where the extortion story begins and ends is famous and an important place in the life of travellers in an out of Maiduguri, a beehive of Boko Haram activities in the northeast, Nigeria.

The town explains everything that makes our roads safe or dreadful as it is now, especially as we are in the third week since the outburst of the Borno state governor, Professor Babagana Umara Zulum over the military extortion saga that engulfed the state.

We pray that God continues to have mercy and give our security operatives the ability to uphold their oaths to serve and protect until the glory of the Maiduguri – Damaturu road returns and driving will not have to be with our engines begging for mercy.