Check Out Top 10 Most Eligible, Wealthy Bachelors In Nigeria


TOFARATI IGE takes a look at some of the eligible wealthy bachelors across the country. 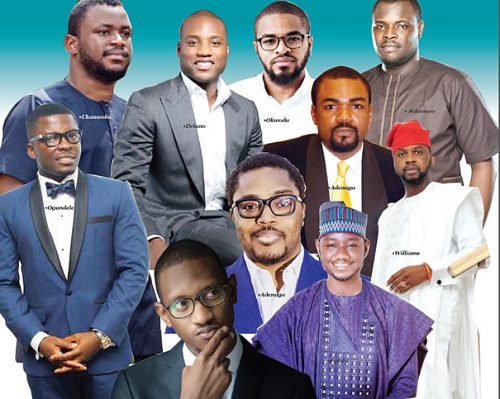 The first son of billionaire businessman, Dr Mike Adenuga, Jide’s marital status has been the topic of several debates. Rich, handsome and blessed with an eye for business, Jide is undoubtedly the crush of many ladies. The entrepreneur was at a time a director at the defunct Equitorial Trust Bank, owned by his father.

He is also the CEO of 3 Inclusive Limited, exclusive importers of Montaudon champagne.

Coming from a family that shies away from media attention, it is not surprising that much is not known about Jide’s love life. But it is clear that when he decides to settle down, it would be the talk of the town.

Sijibomi Ogundele is an ambitious businessman. The young man, who sits atop Sujimoto Group of Companies, has dreams to be like the Trumps and Candy Brothers of the real estate world, and it sure seems like he’s succeeding.

One of the most popular real estate practitioners of his generation, Ogundele, is very passionate about providing luxury to those who can afford it. Some of his buildings have been adjudged to be top-notch, even as he still has several ambitious projects in the pipeline.

However, it seems Sujimoto realises that man must not live by business alone. According to the words of a love song, “Every man needs a woman” and Ogundele apparently believes that too. The entrepreneur hinted that he would get married this year. The New Year resolutions he released weeks ago on his Instagram page contained the words, “I shall marry her for she’s everything to me.”

Well, his friends are waiting!

Unarguably one of the most eligible bachelors in the country, Paddy seems to have it all– good looks, rich background and an entrepreneurial drive.

Though born with a silver spoon in his mouth to billionaire businessman, Mike Adenuga, Paddy has chosen to find his own path. He is the founder of Pegasus Capital Investments Limited, a London-based company with special focus on food and beverages investment.

“I can’t force God’s time and God’s will. In the meantime, I am just taking it one day at a time. Very soon, God will do it for me and it will be final.”

Needless to say, there are many ladies out there who wouldn’t mind parting with an arm and a leg to have the suave dude as the man in their lives.

The name, Ladi Delano, may not ring a bell to many people. But those in the know are aware that the young man is one of the trailblazers of his generation.

The serial entrepreneur is the CEO of Bakrie Delano Africa and he has shown quite clearly that he knows how to make money. He is reported to have made his first million as a liquor entrepreneur while living in China, and ever since, there has been no stopping him.

Not much is in the public domain about Delano because he obviously cherishes his privacy. But what is not a secret is that the businessman is one of the most sought after bachelors on this side of the divide.

It is safe to say that Adebola Williams is friends to plenty of those that matter in the country. The charismatic entrepreneur is usually on hand to support his friends and associates when they have events, thus his face is not scarce on the social scene.

Williams is the co-founder of Red Africa, which is regarded as one of the continent’s largest portfolio of youth media brands. The group is home to brands such as StateCraft Inc, Future Awards Africa and Y! Naija.

Williams was part of the team that worked on ‘branding’ the President, Major General Muhammadu Buhari (retd), during the 2015 general elections. He also worked with the incumbent Ghanaian President, Nana Akufo-Addo, during his election in 2016.

Many have asked the 33-year-old entrepreneur when he would walk down the aisle but he has kept sealed lips. Perhaps, it would happen this year.

Abubakar Falalu is the young man behind the agricultural company, Falgates. The Kaduna-based farmer has a Bachelor’s degree in Management from the Swinburne University of Technology, Australia, and a Master’s degree in Entrepreneurship from the University of Nottingham Ningbo China.

In recognition of his business strides, Falalu was listed among Forbes Magazine’s ‘30 Most Promising Young Entrepreneurs in Africa 2018. Needless to say, Falalu would be a catch for any lady lucky enough to have him.

Obinna Okwodu is the CEO and co-founder of Fibre, a real estate company. Born in the United States of America, the businessman once worked as an investment banking analyst at Morgan Stanley’s real estate division in New York. Prior to that, he obtained dual degrees in Civil Engineering and Management Science from the Massachusetts Institute of Technology.

Intelligent and savvy, Okwodu has a keen eye for opportunities and that’s one of the factors responsible for his rapid business growth. He is one bachelor that many ladies have their eyes on.

Gossy Ukanwoke is the founder of BAU Executive Education, which provides executive education programmes to professionals, executives and graduates looking to develop business and leadership skills online and on-campus. He was listed as one of the ’30 Most Promising Young Entrepreneurs in Africa 2018’.

Ukanwoke’s holding company, BAU R&D, is also said to have completed investments in two Nigerian traditional universities. He has also continued to take his business to higher grounds.

He is the dream man of many ladies.

Creative technologist and entrepreneur, Nasir Yammama, is the founder of Verdant, an agri-tech value chain company that offers innovations to farmers and other stakeholders for improved food production using novel technologies.

The Katsina-born businessman received a medal personally from Queen Elizabeth II at the Queen’s Young Leaders Award in 2017 for his contributions to agricultural business. He has also won several laurels.

Whenever stories about him are written on blogs, several ladies usually say they wish they could get married to him.

Co-founder of Red Africa, Chude Jideonwo, is another eligible bachelor that many women wouldn’t mind settling down with.

Highly cerebral and reserved, Jideonwo has consistently shown that he is one of the leaders of his generation. He garnered more acclaim when he interviewed Busola Dakolo, on her allegations of rape against popular pastor, Biodun Fatoyinbo of the Commonwealth of Zion Assembly.