A teen has been suspended from school and prevented from graduating due to his dreadlocks. 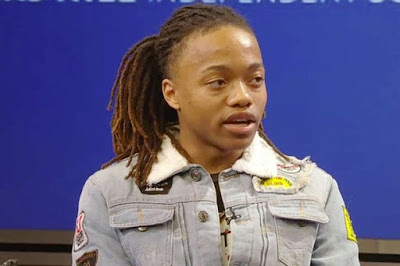 A teenage boy has been suspended from school and told he will not be walking at his graduation because of his haircut.

DeAndre Arnold, 18, from Texas, was told his dreadlocks violated the dress code and was given an ultimatum - cut them off or miss walking across the stage with his peers.

The policy at Barbers Hill High School prohibits hair that touches the collar, ears or in the face, and he was told to change it over the Christmas break if he wanted to come back to school.

But, DeAndre's mum claims his hair doesn't break the policy as he always has it tied up.

After multiple meetings with school officials and an unfair ultimatum, DeAndre told KRIV he decided not to cut his hair and was punished with in-school suspension.

It was only at this point that DeAndre was given the news that he wouldn't be able to walk the stage with his peers at his graduation unless his abided by the school dress code.

And DeAndre family stands by his decision, insisting that he will not be cutting his hair too.

DeAndre's father is Trinidadian, so hair is at the forefront of his culture and heritage.

Gary Monroe of the United Urban Alumni Association also said: "DeAndre [and] his family should not have to go through this. But I expect it from a board that has zero diversity”.

Both the school board and Greg Poole, superintendent, refused the appeal and claimed that their issue hasn't been raised against DeAndre's dreadlocks, but the length of them.

Greg claimed: "There is no dress code policy that prohibits any cornrow or any other method of wearing of the hair. Our policy limits the length. It’s been that way for 30 years.”

But DeAndre isn't giving up there. With the help of his supporters and family, they're planning to take the school board to the federal court with 48 hours if they do not offer a solution.

DeAndre's father said: "I won’t stand for anybody bullying my child. He has rights. All he wants to do is graduate."