A woman has died a painful death after setting herself on fire because her husband married another woman. 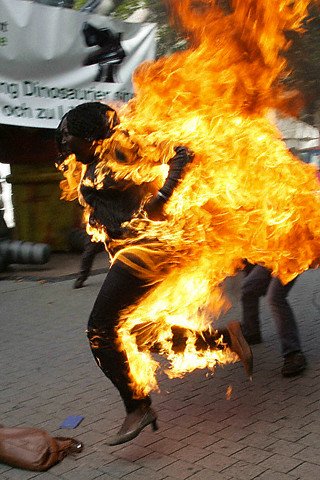 A woman on fire (File photo)
A Nigerian woman has lost her life after setting ablaze over jealousy and rivalry in Gayawa area, Ungogo Local government area of Kano State.
According to a report by Vanguard,  the housewife identified as Rabi was unhappy with her husband before the sad incident.
It was gathered that Rabi’s husband, Badamasi married another wife some times back and this didn’t go down well with Rabi leading to her action to set herself ablaze.
The action of Rabi has put her relatives in the state of mourning as they expressed unhappiness with the circumstances surrounding her death.
When contacted, the spokesperson of the police, DSP Abdullahi Haruna said he was trying to make an inquiry from the Divisional Police Officer, DPO of the area.
However, as at the time of filing this report, DSP Haruna is yet to issue any official statement on the incident.
Top Stories