'I Will Show Him I'm The Governor': See The Moment Obaseki Strongly Warned Oshiomhole (Video)


Governor Godwin Obaseki of Edo State seems to be warming up to curtail the excesses of his Godfather, Adams Oshiomhole. 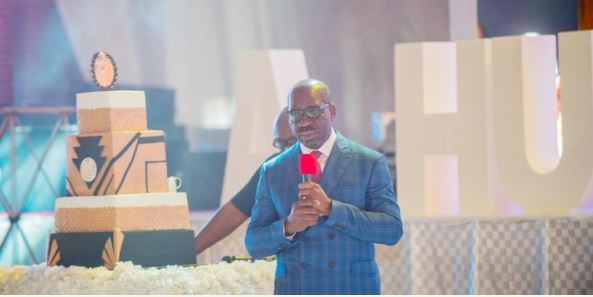 Governor Godwin Obaseki has sent a direct warning message to the national chairman of the ruling party, APC as their power tussle lingers on.

At a meeting with chairmen of the All Progressives Congress (APC) across the 18 Local Government Areas of the state, the governor said anti-party activities carried out either by the suspended National Chairman of the APC, Adams Oshiomhole or his allies in the EPM would be dealt with.

The governor warned Oshiomhole to desist from his provocative activities or he may be forced, as governor, to invoke his powers to deal with him pointing that the national chairman would not condone a fraction of his misdemeanor when he was the governor of the state.

"We are warning the suspended national chairman (Adams Oshiomhole), if he continues his activities in Edo State, I will show him that I am the governor of Edo State," Obaseki said amidst cheers.