A man has been welcomed by the Governor Kano state after he trekked many miles to celebrate his supreme court victory. 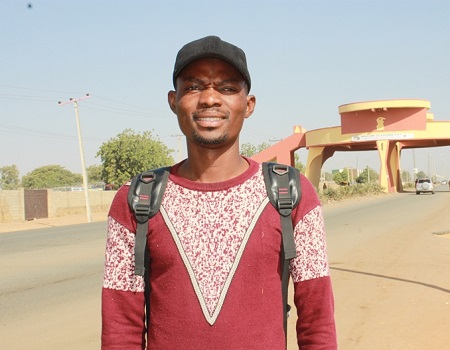 Comrade Nura Ali Batsari
Governor Abdullahi Ganduje of Kano State has honoured Comrade Nura Ali Batsari for trekking from his hometown Batsari in Katsina State to cogratulate the governor over his victory at the Supreme Court.
While receiving him at the State Government House, Ganduje represented by his deputy, Nasiru Yusuf Gawuna, explained that the “Comrade Batsari’s visit is a clear testimony of his love and affection to our administration and by extension his admiration to the numerous achievements recorded in the state.
“Whoever comes to congratulate our government over this victory is definitely cogratulating the people of Kano State because it was their prayer that has been answered by Almighty Allah which takes us to this level,” Ganduje noted.
Ganduje expressed his sincere gratitude to Allah (SWT) for his mercy in making the truth to prevail and appreciated the continued prayers and support from people like Comrade Batsari whom he said had sacrificed his energy to come to Kano by trekking from Katsina to congratulate him on the victory.
His words, “I must warmly welcome my guest Comrade Nura Ali Batsari who really sacrificed his energy and time to come to Kano and rejoice with us over our victory at the Supreme Court. His coming by trekking indicates his satisfaction on this administration’s commitment to do the needful in actualising its mandate for the good people of Kano.”
Ganduje commended some of the members of the Katsina State House of Assembly who on Batsari’s arrival, trooped to the government house to also testify the kind of love he has on the great APC and Governor Ganduje in particular.
Top Stories