The US has warned Nigeria that the country will be in trouble if it allows Abacha loot being repatriated to Nigeria to be stolen again. 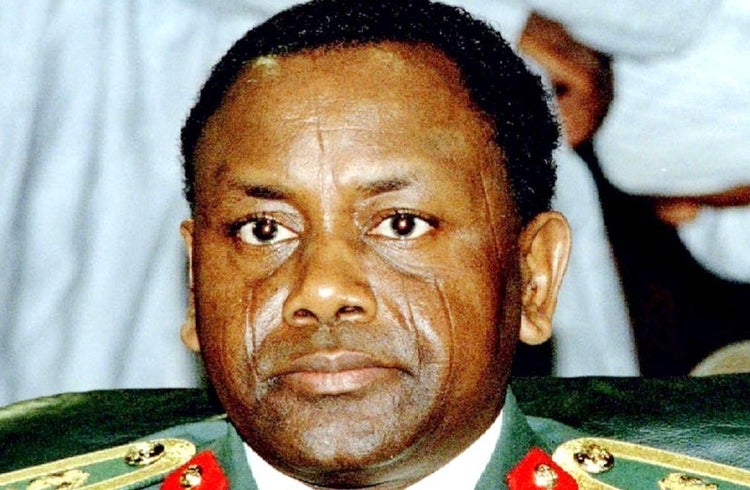 Sani Abacha
The United States has warned the federal government that it will pay back about $321m Gen. Sani Abacha loot soon to be repatriated to Nigeria if it stolen again.
The US said Nigeria would be made to replace the money if stolen.
This was made public by the spokesperson for the US State Department, Morgan Ortagus, in a statement.
He said this was one of the agreements between the US, Nigeria and the Island of Jersey, where the funds are being kept.
The statement read in part, “The funds will be used by the Nigerian Independent Sovereign Authority for three infrastructure projects in strategic economic zones across Nigeria.
“To ensure that the funds are used responsibly and for the good of the nation, the agreement includes mechanisms for monitoring the implementation of these projects as well as external oversight, and it requires Nigeria to repay any funds lost as a result of any new corruption or fraud to the account established to hold the returned assets.
“This return reflects the growing international consensus that countries must work together to ensure stolen assets are returned in a transparent and accountable manner.”
The US said the arrangement was consistent with the commitments both the US and Nigeria made under the principles agreed to at the 2017 Global Forum on Asset Recovery co-hosted by the US and the United Kingdom.
The statement  said, “This agreement is a symbol of the weight that the United States government places on the fight against corruption.  We welcome President Buhari’s personal commitment to that fight, and we will continue to support civil society and other Nigerian efforts to combat corruption at all levels.  The fight against corruption is an investment in the future of Nigeria.”
Abacha, who ruled Nigeria  between 1993 and 1998, is believed to have diverted over $4bn from the nation’s treasury.
Over $1bn has been recovered from his loot so far.
However, there have been rumours that the funds have not been properly managed by successive governments.
Loot to fund Lagos-Ibadan, 2nd Niger Bridge’
Meanwhile, the Federal Government  has  said the  Abacha loot  will be  spent on  repairing   the Lagos-Ibadan Expressway, Abuja-Kano Road and  Second Niger Bridge.
The Attorney General of the Federation and Minister of Justice, Mr Abubakar Malami (SAN), said this during the signing of a tripartite agreement with the United States  and  Island of New Jersey for the repatriation of the fund to Nigeria  in Washington DC on Tuesday.
According to him, the  three projects will help boost economic growth of the country.
He said,  “The government of Nigeria has committed that the assets will support and assist in expediting the construction of three major infrastructure projects across Nigeria – the Lagos-Ibadan Expressway, Abuja-Kano Road and  Second Niger Bridge.
“These projects are being executed under the supervision of the Nigeria Sovereign Investment Authority as a Public Private Partnership that will boost economic growth and help alleviate poverty by connecting people and supply chains from the East to the West and to the northern part of Nigeria, a vast area covering several kilometres  with millions of the country’s population set to benefit from the road infrastructure.”
He also called on civil society organisations and the Nigerian public to be involved in the monitoring of the usage of the recovered fund in the implementation of the key infrastructure projects.
The Solicitor General and Attorney General-designate of Jersey, Mark Temple, said the agreement “represents the culmination of two decades of intensive work by law officers in Jersey, the United States and Nigeria”, adding that “the return of the money  to Nigeria had been delayed by a number of hard-fought challenges by third parties which were defeated in the Courts in Jersey and the United States”.
He  said  the money  “will be subject to monitoring and reporting obligations”.
Jersey’s Minister for External Relations, Senator Ian Gorst, said, “Since becoming aware that the alleged proceeds of Abacha corruption and money laundering had passed through Jersey’s  financial institutions, the Jersey authorities have done everything within their power to investigate what happened and to return the money to its rightful owners, the people of Nigeria.”
Top Stories