Man Chains And Tortures His Two Wives In Katsina (Photo)


A man has been arrested by the police in Katsina state for chaining and torturing his two wives. 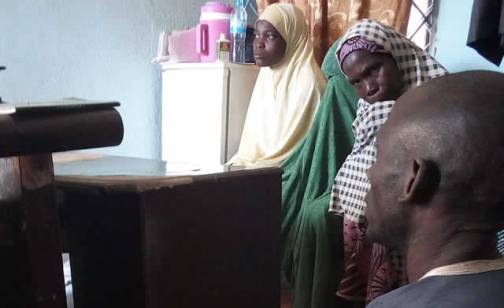 Samaila arrested for chaining his two wives
A man identified as Samaila Musa, 30 has been arrested by the police for chaining and brutalising his two wives for months.
The Katsina Police Public Relations Officer, SP Gambo Isah, who made this known on Tuesday in Katsina, said the suspect was arrested following a tip-off.
He said that Musa lived in Yan-Nabayye village in Rimi Local Government Area of the state.
“On January 23, 2020, at about 15:30 hours, based on tip-off, the command succeeded in arresting one Samaila Musa, 30, of Yan-Nabayye village, Rimi local government area of Katsina State suspected to be a notorious member of secret cult group.
“A team of policemen led by DPO, Rimi Division, uncovered the house where the suspect incarcerated his two wives and shackled them with chain in one room.
“In the course of investigation, the police discovered that the victims were having marks and signs of brutalisation on their bodies.
“They defecate in the same room where they were chained, their hair barbed for ritual purposes by the suspect.
“He also ground pepper and put in their private parts and eyes during their menstrual periods.
“The suspect also asks them to clean up semen on their clothes after having sex with them and forces them to drink the water,” he said.
Isah also stated that police arrested one Suleiman Salisu, 35, of Yar-Tsamiya village, who was his accomplice adding that investigation is ongoing.
The suspect, however, said that he chained them because they abuse drugs, but denied brutalising them.
However, the victims confirmed that they were brutalised by the suspect.
One of the victims was chained for 10 weeks, while the other was chained for 10 months. They further said that they lived in isolation because nobody wanted to visit their house.
Top Stories