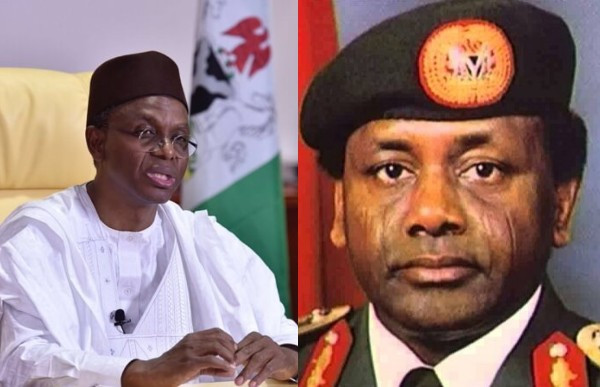 Governor El-Rufai and Sani Abacha
The Certificate of Occupancy (C of O) of the comatose Durbar Hotel believed to be owned by late Head of State General Sani Abacha has been revoked by Governor Nasir El-Rufai.
The government of El-Rufai claims Abacha owes ground rent for 19 years now.
The Kaduna State Governor disclosed this in a letter dated December 31, 2019 and addressed to Alhaji Mohammed Abacha, months after the hotel which has been in a dilapidated state was demolished by his administration.
Though the ownership of the hotel had been in contention between the Federal Government and the Abacha family since 2001, a Kaduna-based high court had issued an injunction which restrained the governor and other agencies of the state government from demolishing and taking over the hotel.
The revocation letter which was jointly signed on January 3rd, 2020, by Governor El-Rufai and the Deed Registrar, Yusuf Muawiyah of the Kaduna Geographic Information Service (KADGIS), reads in part;
“Violation of terms of grant; security and safety risk to the people of Kaduna State.
“In the light of the above, you are hereby notified that the said plot of land had thus been revoked in line with section 28 of the Land Use Act, 2004.
“And whereas the said Durbar Hotels Company Nigeria Ltd has/have failed to comply with the conditions of the grant, it has become necessary that the certificate of occupancy No. KD17789 be revoked.
“Now therefore, in exercise of power conferred upon me by the Land Use Act, CAP L5 Laws of the Federation, Nigeria 2004, I hereby revoke with effect from the 30th day of December, 2019 the Right of Occupancy over the above mentioned plot.”
While the Supreme Court is being awaited to pass its judgement on ownership of the property, Justice Hannatu Balogun of the State High Court restrained the Kaduna State Government from tampering with the property following its demolition, after Reuben Atabo, counsel to Durbar hotel management and the Abacha family filed an ex parte motion.
Top Stories