We Will Hunt Down Your Children; Nnamdi Kanu Threatens Abia Police Commissioner


IPOB Leader, Nnamdi Kanu has threatened to hunt down the children of the Abia Police Commissioner, Ene Okon. 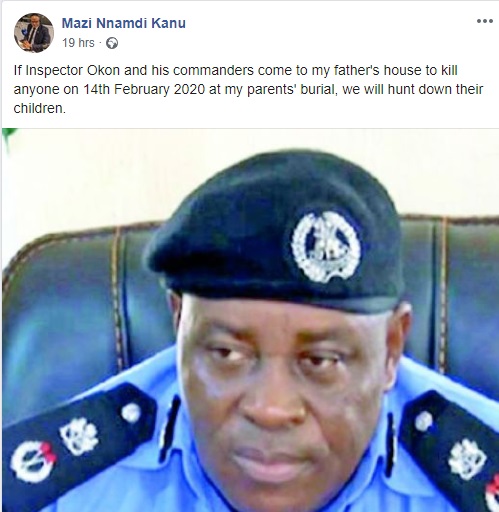 Nnamdi Kanu, the leader of the Indigenous People of Biafra (IPOB) has threatened to hunt down the children of Abia Police Commissioner, Ene Okon if any killing occurs at the burial ceremony of his parents in Afaraukwu on Friday February 14.

The IPOB leader addressed the Abia Commissioner as "Inspector Okon" and also attached his photo in the Facebook post in which he passed off his threat.

“If Inspector Okon and his commanders come to my father’s house to kill anyone on 14th February 2020 at my parents’ burial, we will hunt down their children."

This is coming few days after the Abia Commissioner, Ene Okon warned IPOB members to steer clear of the burial.

He was quoted saying;

“Do you think we will sit down here and allow IPOB to participate in the burial? Whoever thinks along that line is fooling himself. IPOB will dance during the burial and the police elephants will dance too.

“I have already reached out to the traditional prime minister of Afaraukwu (Nnamdi Kanu’s community) and told him that if they want the burial to go smoothly and for police to give them security, they should tell IPOB not to near the area not to talk of participating in the burial. If they fail to adhere to what we’ve told them, that means they do not want the burial to go on smoothly because we are going to scatter the place.

“IPOB is proscribed by the Federal Government. I, as the Commissioner of Police in Abia cannot sit here and allow any proscribed group to operate anywhere in this state. I am saying this again for emphasis that there is no way police will allow a proscribed group to participate in the burial of the King and Queen of Afaraukwu simply because they are the parents of their acclaimed leader, we will not allow that and we cannot take anything for granted in the face of abundant intelligence on threat by IPOB.