Okada/Keke Ban: Sanwo-Olu, Now The Most Hated Man In Lagos


Will the decision by Lagos governor, Babajide Sanwo-Olu to ban Okada/Keke cost him politically? 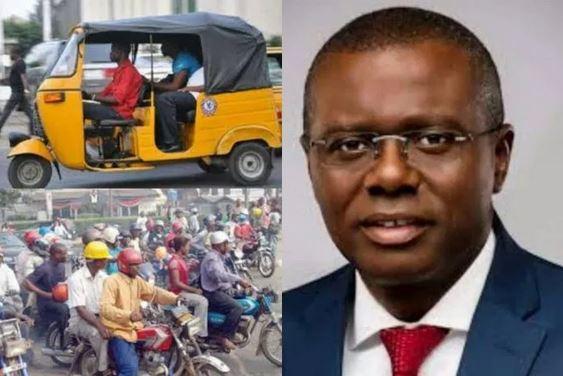 Babajide Sanwo-Olu
Since February 1, one name that has been on the lips of most Lagosians has been that of the governor, Babajide Sanwo-Olu. If you reside in Lagos, you will know the name Sanwo-olu did not come up in conversations in praises but in condemnation and tongue-lashings by angry and frustrated residents who have had to deal with a hectic transport situation in the last two days after the government had a week earlier announced the ban of the operation of commercial motorcyclists (Okada) and tricyclists (Keke Maruwa) on major roads, highways and bridges in 15 Local Council Areas of the State.
The month started on a very frustrating note for many Lagosians who usually rely on public transportation to get to their various places of business and work. For the many that rely on Okada to escape the hectic Lagos traffic, the Okadas were nowhere to be found. For those that consider entering buses, unfortunately, the drivers have chosen to take advantage of the chaos to hike the fares.
The biggest hit from the present troubling situation has been taken by the thousands of commercial motorcycle riders, better known as Okada who have been rendered jobless from the recent ban. Not only is their source of livelihood being denied them, the Lagos State Task Force went ahead to confiscate hundreds of bikes in several areas of Lagos.
Following the ban, there was pandemonium in areas including Ijora, Maryland, Ikeja, Apapa, Oyingbo and Yaba as Okada and Keke riders protested and clashed with security agents. Roads were blocked and tyres burned in the middle of the road thereby blocking other commuters from getting an already frustrating situation.
The decision to restrict the Okada and Keke riders has not gone down well with many Lagosians who waited at several bus stops for hours trying to board the few available buses to get to their places of businesses. Many lamented how they had to trek long distances and pay higher fares as a result of the ban while some even claim the government’s decision is elitist and targeted at the poor.
Lagosians are not happy with Sanwo-Olu. I was in a bus yesterday and people were discussing the whole situation. A man who looked like he was in his early 50s condemned the governor for carrying out the policy. Another man sitting right beside me blamed the governor for the long hours he had to spend at the bus stop before finally being able to board this bus. From the back seat, I could hear others condemning the governor’s party for being insensitive to the plight of Nigerians as a whole.
To be fair, this is really no fault of Sanwo-Olu. The governor who has never openly declared he was going to ban the operation of Okadas, is only putting to effect a law that has been enacted since 2012 by the then government of Babatunde Fashola.
On its part, the government believes that the unrestricted and unregulated operation of the Okada and Keke Maruwa has accounted for several robberies and kidnappings while also being responsible for many road accidents in the State. The government also claim that the restriction of movement will help ease the traffic situation in the State
For a city with a population of about 20million and notorious for heavy traffic jams, Okadas and Keke Maruwas have become the most common form of public transport. People rely on them because they ply the streets and hard-to-reach areas where buses and taxis are unable to go. The government ought to have put effect palliatives such as workable alternative transport system before banning them.
As it is, several people who will suffer from the ongoing ban including the Okada and Keke Maruwa riders, and their beneficiaries. Businesses that are built on the sales of Okada and Keke Maruwa, as well as parts, will also suffer, leading to owners of such businesses either downsizing staff strength or shutting down.
We cannot overemphasize the struggles of the average Lagosians who will now have to pay more for bus fares to get to their place of work or business. Some people who could not trek long distances were even seen yesterday hiring horses as a means of transportation in the Maryland-Ikeja area.
I can’t help but feel sad for the motorcycle-hailing startups who will likely have it worse. You can bet startups like Oride, Gokada and Max.ng would have invested millions of nairas in their respective businesses only for the government to come up with this policy. These startups together have a workforce of several thousand of people who are now likely going to be thrown out of their jobs.
Victor Enengedi,
Lagos
08063274521, 08097614101
Top Stories