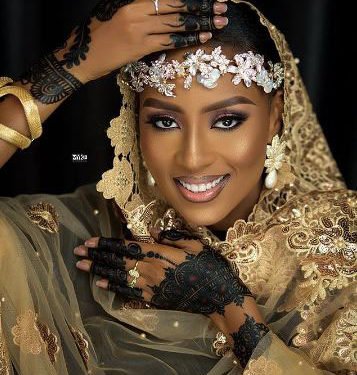 Kannywood actress Maryam Booth
Kannywood actress, Maryam Booth has finally broken her silence after her nude video was leaked on social media over the weekend.
She has now threatened to sue the person who leaked the video, a report by TheNation has revealed.
Recall that an unclad video of the 26-year-old Hausa actress became a trending topic on Twitter at the weekend.  A user had posted the video.
In the three-second video, the fair actress was captioned naked while dressing up. But on realising she was being filmed by her partner in the cream room, rushed to snatch the phone from the anonymous man.
There are many responses to the short video. Some of her fans and colleagues showered her with praises, urging her to take the legal battle against the hacker.
Her colleagues, who include Ali Nuhu, Sani Danja, Rahama Sadau, Falalu Dorayi, Usman Uzee, and Nafeesat Abdullahi urged her to stay strong as the investigation continues.
A picture of Booth was on the Instagram of Nuhu’s handle with the caption: “Oh Allah, nothing is easy except that which you have made easy. I pray you to make it easy for her at this trying period. Stay strong daughter and may Allah protect us from the plot of enemies.”
The award-winning actress had accused her ex-boyfriend, Ibrahim Ahmad Rufai known as Deezell of blackmailing her by circulating the nude video on social media.
On February 8, Booth took to her Instagram page. According to her, Deezell had been threatened to leak the three-year-old video.
“For the record, I want to categorically state that this same man (Ibrahim Ahmad Rufai) has been in multiple occasions threatened to leaked my video if I didn’t give him money,” said the actress who started acting career at a tender age.
“I am aware of the current trends and media outrage regarding the unfortunate leaked video, purported to be me, released via a number of social media platforms, and viewed by thousands of people so far.
“Initially, I wanted to keep mute until security agencies concluded their forensic research and investigation. The recent statement from someone, in the person of Ibrahim Ahmad Rufai, popularly known Deezell, leaves me with no choice but to break the silence.
“As a woman, actress and role model to millions, I will not let this matter to be swept under the carpet. I have been trying to protect my dignity through possible means, but without my knowledge, the three-year-old video was leaked.”
Responding, Deezell said it was false.
Deezell has demanded an apology. He declared that the allegations were false as his religion is against exposing the wrongs of others to the public.
He said: “My attention has been drawn to a certain nude video of a popular Hausa actress Maryam Booth circulating on social media platforms, coupled with a false allegation on my person that I leaked the video.”
“Unfortunately, these misguided elements and agents of destruction failed woefully to furnish any evidence and particulars that link me with the said leaked video in circulation. As a good faith requires an answer, I wish to make it clear that, at all material time, I did not leak the alleged video in circulation on social media and to the best of my knowledge, I do not know who leaked the video.”
“As a Muslim, I know that it is against the Holy Qur’an and teachings of our noble Prophet Muhammad (peace be upon him) to spread out or expose wrongful action/deeds of another to the public, more especially on social media with sole aim of causing harm.”
This is not the first nude case in Kannywood. In August 2007, a video of popular Hausa actress Maryam Hiyana in intimate relationship with her boyfriend surfaced online.
The Kano State Censorship Board (KSCB) has pledged to sanitise the Hausa film industry. After the scenario of Hiyana, its management announced stricter guidelines, such as the banning of married women from acting, while also requiring women in the industry to have a male guardian who would be legally responsible if their ward broke the rules.
Its Executive Secretary,  Isma’el Na’ Abba, reportedly said the primary task of the board is to preserve Hausa culture.
However, Chairman for Kannywood Artistes Council, Alhassan Kwalle, has said despite the nude video of Booth, the body would not ban her.
Kwalle added that unlike the sextape of another Hausa actress that went viral many years ago, which involve sex, Maryam case is different.
“For this video, she (Maryam) tries to seize the phone from the person recording her. She just left the bathroom and trying to wear a clothe when the person recorded her.”
Top Stories