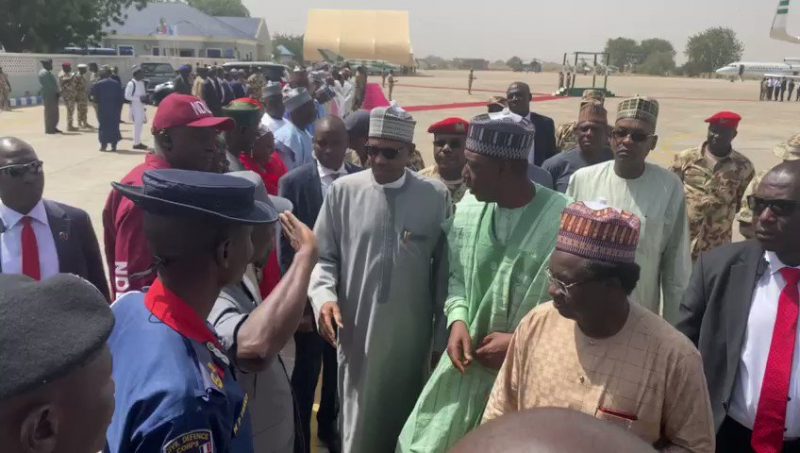 President Muhammadu Buhari in Maiduguri
Residents of Maiduguri yesterday showed their anger by booing President Muhammdu Buhari over the killings by Boko Haram terrorists.
Recall that Buhari had landed in Maiduguri, the Borno State capital, from Addis Ababa, Ethiopia after the Thirty-third (33rd) Ordinary Session of Heads of State and Government of the African Union (AU) in Addis Ababa, to pay a sympathy visit to the government and people of the state who were struck by the attack.
President Buhari, in a statement issued by his media aide, Garba Shehu, commiserated with the family of victims of attacks, and assured them that his administration will continually frustrate the devilish operations of Boko Haram, with a promise that it will soon be a thing of the past.
In a viral video, residents of the metropolis, who came out early, lined up on both sides of the road along the airport way, expressing their disapproval by booing Buhari’s convoy, with a loud chorus in Hausa, ‘Ba ma so’ which means: ‘we don’t like it.’
His visit is coming days after Boko Haram terrorists on Sunday night killed 30 passengers from dozens of travelers that were forced to pass the night in Auno, a community 25 kilometers away from Maiduguri.
See videos below:

Bamaso, Bamayi to Buhari in Maiduguri. Meaning we don't want, we are not interested pic.twitter.com/8rbnIEddho

VIDEO: Watch as President Buhari is booed in Borno State as he visited following Boko Haram attack in Auna.

Note that this is the base of the President and a response like this from those in the eye of the storm is very SYMBOLIC.

Enough is enough. Something must give. Sigh. pic.twitter.com/QnH4B1oc5r

For Maiduguri people to booing buhari, then you should know them Abba kyari and that Tukur of a guy have failed the north east region

Buhari cabinet are useless plus him

Buhari getting booed in Maiduguri is instructive. If this doesn't push for a more drastic and decisive move in rejiggering our security architecture, it should at least worry the APC brand. If PMB can be booed in Maiduguri I wonder how they intend to sell anyone going forward.

President Buhari has obviously lost the cultist support he once enjoyed in Maiduguri as a result of his failure to stop the endless attacks and killings by BHTs. pic.twitter.com/5E9fYqJGDU