There's been public outrage after a video surfaced online of a Chinese man flogging his Kenyan worker for coming late. 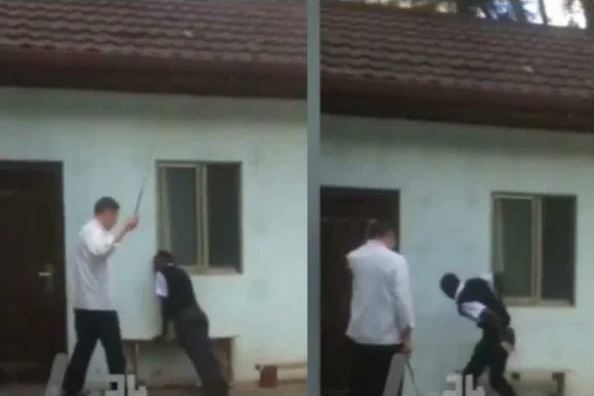 Many activist have taken to the streets of Kenya to protest after a Chinese hotel manager was captured on video beating a Kenyan waiter for coming to work late.

Their outrage is understandable after the disheartening video made rounds on social media. The Chinese man who is a senior official at Chez Wou Restaurant in Nairobi’s Kileleshwa estate, can be seen flogging a Kenyan employee for allegedly reporting to work late.

In the short clip shared by K24, the Chinese national is seen asking the Kenyan national identified as Simon Oseko to go down on his stomach as he holds a cane in his hand.

In the video, Oseko is seen receiving not one but two canes from the Chinese manager as his colleagues watched from a distance, while others laugh at the development.

The boss is heard asking him to choose which part of the body he preferred whipped. The youthful waiter is then heard pleading with the boss to administer the canes fast enough so that he can be done with it sooner. The boss then goes ahead to hit the helpless waiter on his ribs and the waiter is seen wreathing in pain.

Oseko reported the incident at Kileleshwa Police Station where he obtained a P3 form and authorities are said to have taken up the matter to investigate, the news website reported.