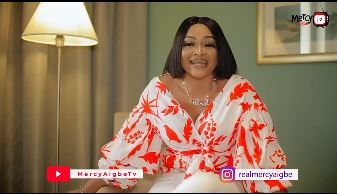 Mercy Aigbe, one of the popular Nigerian actresses has made a video which has gone viral on social media.

In the video which she did to commemorate Valentines Day, Aigbe spoke to women about how to keep their men during this love period.

However, she irked her many fans when she proceeded to advise single ladies who are dating married men.

According to Aigbe, all single ladies who are dating married men should concentrate on collecting money from those men since the men already belong to other women.

After the video dropped, fans attacked Mercy Aigbe for encouraging singe ladies to date married men instead of asking them to desist from the act.