The governor of Rivers state, Nyesom Wike has taunted the chairman of the All Progressive Congress. 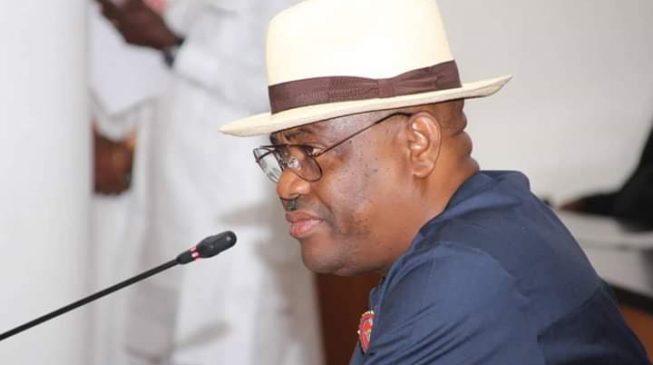 Nyesom Wike, governor of Rivers state, has taunted Adams Oshiomhole, national chairman of the All Progressives Congress (APC), saying he has dumped his “ordinary khaki” for “safari with diamond buttons”.

While khaki is a cloth made from wool or cotton, safari is made from expensive fabric and mostly used by those who are well to do.

Oshiomhole, who adopted the khaki since his days as president of the Nigeria Labour Congress (NLC), and Wike have been in the news since the supreme court replaced David Lyon, candidate of the All Progressives Congress (APC) in the Bayelsa governorship election with Douye Diri of the Peoples Democratic Party (PDP).

Oshiomhole had kicked against the ruling, which he described as an attempt to impose an unpopular candidate on the people of Bayelsa.

Wike was among the PDP leaders who asked Oshiomhole to steer off the issue in Bayelsa and the APC chairman subsequently described the Rivers governor as a violent politician.

But at a press conference in Port Harcourt on Saturday, the governor said Oshiomhole ought to have accepted the supreme court ruling, “whether good or bad”.

“Oshiomhole cannot destabilise this country… who the hell is Oshiomhole to say that nobody can be sworn in when the Supreme Court has made a pronouncement?” he asked.

Wike also called for the resignation of Oshiomhole, describing him as a “character that anybody should associate with”.

He said the APC chairman plunged the ruling party into needless crisis and does not have the support of many governors.

“Because of people like Oshiomhole and his style of leadership, his party lost so many areas they ought not to have lost. What made them not to have candidates in Rivers State and Zamfara, its because of Oshiomhole. Oshiomhole led to the problem they have in Bayelsa,” he said.

“Oshiomhole said he fought godfatherism and at the same time, he wants to install himself as a godfather in Edo State. Why is he fighting Obaseki because the man doesn’t take instructions from him? He (Oshiomhole) preaches what he doesn’t practice.

“He was taught a lesson in Rivers, a bitter lesson and I want to repeat, if you come to steal our mandate, the people will respond accordingly. They will oppose your stealing of their mandate. So, Oshiomhole thinks that because he is in the ruling party, nobody should say anything or do anything. . You may be closer to the President and that is not the way to retain your position as Chairman of the party because Oshiomhole doesn’t have the support of most of the Governors because of his style of leadership.”

The governor said he stopped attending the national economic council meeting because Oshiomhole allegedly turned the forum into an avenue to bash former President Goodluck Jonathan, even when he had gone to praise Jonathan at Aso Rock for ensuring credible elections that made him governor of Edo at the time.

“Meanwhile, this was the same man Oshiomhole went to praise for allowing ‘one man, one vote’. But when the man (Jonathan) left, Oshiomhole changed. That is his character.”