Ibadan chiefs have accused Olubadan of selling chieftaincy titles in the town for N30M. 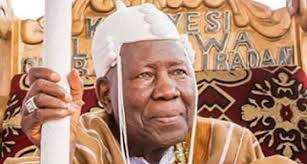 The members of the Olubadan-in-council have accused Saliu Adetunji, Olubadan of Ibadan, of commercialising chieftaincy titles in the town.

The crisis between the monarch and the chiefs, who are members of the Olubadan-in-council, started when Abiola Ajumobi, former governor of the state, reviewed the Ibadan chieftaincy declaration and crowned 21 chiefs as obas in 2017.

In a letter made available to journalists on Sunday, the chiefs alleged that people now pay as much as N30m to be installed as a traditional chief in Ibadan, saying the action has led to the installation of people with questionable characters.

“The other issue which drew our ire and which was a reflection of the denial of our patriotic contributions at the Olubadan-in-Council meetings was the criminal commercialisation of Ibadan traditional titles the moment Your Imperial Majesty ascended the throne of Olubadan, which was a sharp departure from what we all agreed to and practised during the reign of your predecessor,” the statement said.

‘’It sounds odd, unthinkable and unimaginable that people now pay as much as N30m to be installed as a traditional chief in Ibadanland. This is against one’s antecedents and family contributions to the development of Ibadanland, which are the traditional yardsticks to measure qualification for installation.

“The implication of this ‘cash and carry’ approach is the installation of some people with questionable moral background at the expense of decent and genuine people with proven track record and whose genuine and verifiable source of income could not meet the demand of the palace.”

The chiefs added that they reserve the right to demand the removal of the king, and that those calling for their banishment from Ibadan are “enemies of progress”.

They also accused the Olubadan of relegating them to “mere onlookers” while his wives and some other members of his family have become the decision-makers in the town.

They said: “If they are not shallow in thought or shortsighted, they would appreciate our role as the kingmakers who ensured your Imperial Majesty’s installation in the first place and reserved the right to call for your Imperial Majesty’s abdication of the throne if we are not comfortable with the administrative style of the palace.

“We are not aware of any of the Olubadans in the history of Ibadanland whose wives and family members were made members of Olubadan-in-Council. Our attempt to check this anomaly, through protest, was rebuffed and our personalities verbally attacked and recriminated by the Oloris in the presence of your Imperial Majesty without a word of caution.”