Wow! 4 Siblings Team Up To Buy House For Their Mother Who Sold Fruits To Send Them To School


Four siblings have teamed up to buy a house for their mother who sold fruits to send them to school. 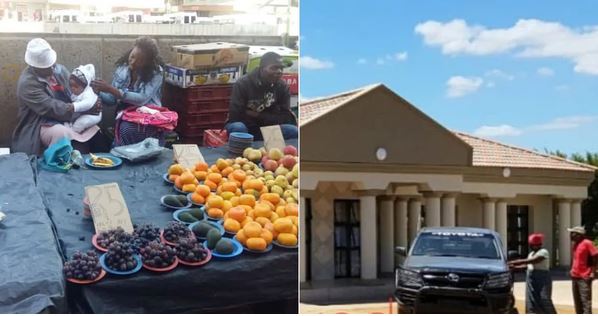 The siblings bought a car for their mother

A man identified as Katekani Terrence Makondo has shared the truly heartwarming story of his hardworking mother on his Facebook page. In a post on his page, the man explained that his mother sold fruits to send him and his three siblings to school.

According to the man, she was able to raise a chemical engineer, a mechanical engineer, an IT systems operator, and a lawyer. Makondo shared a photo of his mother holding a baby. She was sitting beside a young woman and her wares of fruits were before her.

To appreciate all her sacrifices, Makondo said that he and his siblings bought her a beautiful house. He also shared the photo of the house on his social media page.

According to him, a person does not need to have a formal job to raise their children and give them a better education. He also used the opportunity to salute all hardworking women doing the most to support their kids.

Social media users applauded the woman for her sacrifices and praised the siblings for recognising what she gave to them.

Petra Labuschagne said: "Single moms work so hard to do the best that they can for their kids..most of them..so may she receive many blessings and I hope all you kids that received such educations care for her in her old age as she cared for you"

Vincent Mamba: "This is a true story, I know your mother, your sister was my classmate at varsity"