Residents of Katsina villages were given the shock of their lives after bandits raided their homes to wreck untold havoc. 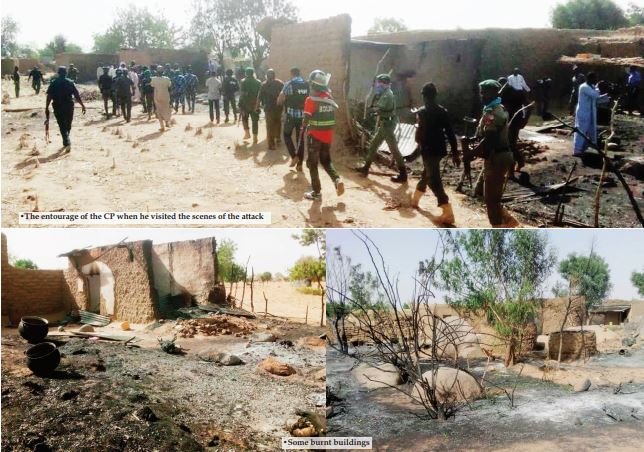 Scenes from the tragedy

Friday, February 14, 2020 is a date that will linger in the memories of the inhabitants of two Katsina communities, Tsauwa and Dankar. It was the day bandits, riding on 180 motorcycles, each carrying two or three people, invaded the villages while the residents were saying their Magrib prayers at about 6.30 pm, shooting sporadically.

Some of the villagers, who were performing ablution, were shot dead in the process. At the end of the tragic incident, no fewer than 30 people lay dead; they  included elderly people and infants who were allegedly seized while sucking their mothers’ breasts and thrown into the fire the bandits set to houses in the communities. Property worth millions of naira, including domestic animals, were also either burnt or looted.

The state’s Commissioner of Police, Buba Sanusi, who led a team of policemen accompanied by soldiers of the Operation Puff Adda and journalists on a visit to the two communities, expressed shock over the development, saying that security operatives would not condone such a criminal act of wanton violence against the people.

Recalling the ugly incident, two members of the affected communities, 45-year-old Salisu Lawal and 52-year-old Baba Dahiru, told The Nation that they  had no inkling of the invasion, particularly because the state had enjoyed relative peace after the government’s dialogue with bandits about seven months ago.

They, therefore, urged the state government to quickly intervene in the matter to stem the tide of another round of incessant attacks.

They said: “Our infants who were sucking breasts were forcibly taken off their mothers’ laps and thrown into fire. Also, our food items were set ablaze  while the animals we use in fetching water from Yau Yau and Dankar villages were also killed by the bandits.’’

Our correspondent’s effort to speak with the mothers whose babies were thrown into fire yielded no result as they were said to be among the families that had fled the communities to unknown destinations in the wake of the attacks.

The correspondent, who visited the two villages in company of security operatives last Saturday, reports that residents were seen burying their deceased family members and other loved ones amid tears.

Not only were houses burnt, goats, cows and other domestic animals belonging to the villagers were not spared. Food items and livestock were also looted.

The District Head of Batsari, who is also the Sarki Ruma, Alhaji Tukur Muazu, described the incident as horrible.

He said: “I have never seen this type of destruction in my life. The bandits arrived here (Tsauwa) at about 7 pm on Friday when residents were about observing the Magrib. Some were also preparing to sleep. The bandits laid siege to the villages, killing and destroying anything they sighted.”

He appealed to Governor Aminu Masari to come to the aid of the victims and to strengthen security in the community.

Governor Aminu Bello Masari has since visited the two villages to see things for himself and to commiserate with the victims of the attacks.

During the visit, he assured the people that food items would immediately be made available to them by the state government. He also said there would be 24-hour security surveillance around the communities, while confidence-building measures would be taken to discourage residents from fleeing.

He also announced that ox-driven carts would be provided for the people to fetch water, while two to three boreholes would be drilled in the villages. He said the state government would establish a school in Tsauwa

He said: “Negligence on the part of successive administrations with regard to education is the basic causative agent of banditry in the state.

“The food items in the village were not carted away but burnt to ashes. People were killed and not kidnapped. These are acts of dark civilisation.’’

On the deplorable condition of the road to Tsauwa, Governor Masari assured that the road would be given attention in the projects designed by the World Bank to open up rural agrarian communities.

At Dankar village, Masari sympathised with the people over the demise of nine of their kinsmen in the attacks. He further appealed to them to stop the mass movement from the community, saying that government was doing everything possible to secure them.

The leaders of the two communities, Mai Unguwa Ibrahim Zangina of Tsauwa and Muhammad Suhura of Dankar, thanked the governor for the condolence visit.

They dispelled the rumour that the attacks were reprisals, insisting that they have had no previous record of fighting with any group or bandits.  They appealed to Masari to provide more law enforcement agents to secure the communities.

The Special Adviser to Governor Aminu Bello Masari on Security Matters, Ibrahim Ahmed Katsina, while reacting to the attacks on the two villages in an exclusive interview with The Nation, said the traditional form of security surveillance, which according to him is the best way to augment the presence of security agencies in all the nooks and crannies of the state, would be vigorously explored and revitalised by the state government in collaboration with rural community leaders and traditional rulers.

The special adviser, who lamented on the recent killings in Tsauwa and Dankar villages, urged the people to bear the loss in good faith.

According to him, “Community vigilance and networking is the best way to curb insecurity in the state. Supposing the vigilante groups are functional, these pockets of attacks would have been solved.

“I am sure they can counter these attacks if members of their communities were alerted to their responsibilities and made to understand the concept of neighbourhood watch and community vigilante.

‘’The state is going to focus on how to sensitize members of the public on the need to re-awake themselves on security matters.

“We have identified the problems and what we want is for the community to key into the concept of communal vigilance. Once that is done, we are very sure it would bring sanity to the worrying areas.”

He added that the security operatives in Nigeria are generally overstretched and that the vigilance groups, if established, would play complementary roles in their respective localities to the presence of security in the rural areas.

He further urged the people to rise up to the security challenges in their areas and draw out the modalities for their own surveillance system and strategy.