Remo Stars Football Club have alleged that a SARS officer has pushed one their players to death. 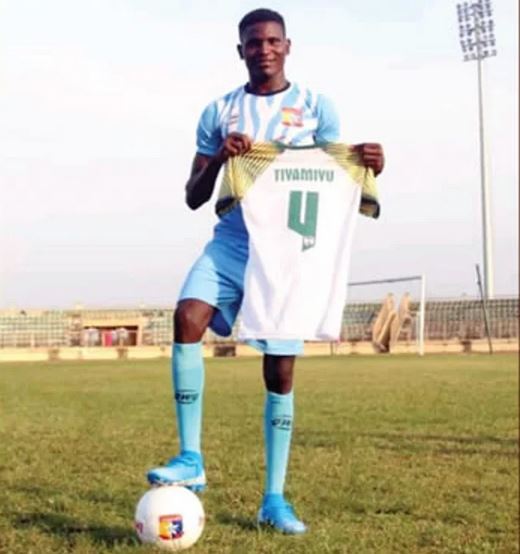 According to Punch Metro, an officer of the Special Anti-Robbery Squad in Ogun State has caused the death of a Remo Stars Football Club’s player, Tiyamu Kazeem, (popularly known as Kaka) after allegedly pushing him from their van onto an oncoming speeding car.

The Media Officer of the club, Dimeji Oshode, in a statement on Saturday, said the incident occurred on Saturday along Sagamu while Kazeem was in his car with one of his teammates, Sanni Abubakar.

The club stated that some SARS men flagged down the footballer and labelled him an Internet fraudster otherwise known as Yahoo boy and insisted on taking him to a nearby police station.

The statement read, “The SARS officers stopped Tiyamiyu Kazeem insisting that he was a Yahoo Boy. He brought out his identity card to identify himself as a player of Remo Stars FC but the officer insisted on taking him to the nearest police station in Sagamu.

“Kazeem and Sanni followed the SARS officers, only for them to notice that they (the SARS men) were driving towards Sagamu-Abeokuta Expressway. The guys asked to know where the SARS officers were taking them to, but this prompted them to stop the car and pushed Kazeem out of the car, and an unknown vehicle knocked him down.”

The player was said to have been rushed to Fakoya Hospital in Sagamu, where he was confirmed dead. Until his death, he was the assistant captain and defender of the football team.

“He was a humble and reliable defender for Remo Stars FC in the ongoing 2019/2020 Nigeria National League.

“May his soul rest in perfect peace and may the Lord help the family to bear the irreparable loss. This is a great loss to Remo Stars Family and the entire football fraternity,” the club added.

However, the Ogun State Police Command said Kazeem was crushed to death while escaping from a police vehicle heading for Abeokuta, the state capital.

The Police Public Relations Officer in the state, Abimbola Oyeyemi, said the player was arrested by a police inspector from the Zonal Intervention Squad for wearing a military cap and was being taken to the ZIS office in Obada in a police operational vehicle.

Abimbola said the vehicle developed a fault on the road was being fixed when Kazeem jumped out and ran away.

He said the suspect was crushed to death by an oncoming vehicle while he was crossing to the other side of the Abeokuta-Sagamu Expressway.

Abimbola said, “The fact of the matter is that an Inspector of police from ZIS went to arrest the deceased for putting on a military cap.

“On their way to Abeokuta, the vehicle developed a mechanical fault and while trying to rectify it, the man jumped down and took to his heels. While crossing the road, a fast moving, oncoming vehicle crushed him to death.”

Meanwhile, there was pandemonium on Saturday in Sagamu, when angry residents staged a protest on the streets over the alleged murder of Kazeem by the SARS officer.

The aggrieved youths marched to the palace of the Akarigbo of Remoland, Oba Babatunde Ajayi, chanting anti-SARS slogans and demanding sanctions for the ‘killer’ cop.