Nigerian Author and Feminist, Chimamanda Adiche hosts Hollywood Actress, Lupita Nyong’o in Lagos ahead of her role in the upcoming Americanah movie. 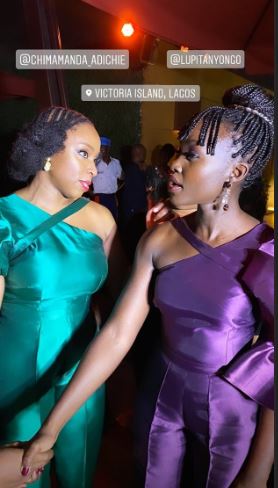 Adichie hosted the Hollywood actress for her upcoming movie Americanah.The event was a private reception which had many Nigerian celebrities like D'banj, Dakore Egbuson-Akande, Omawumi, Richard Mofe-Damijo, Toolz, Seun Kuti, and many more .

The actress was hosted at a private reception in Lagos state organised by Nigerian author Chimamanda Ngozi Adichie.

It was gathered that Adichie hosted the actress for her upcoming movie, Americanah.