A 16-year-old boy has been arrested and dragged to court after stealing N340,00 from a bank. 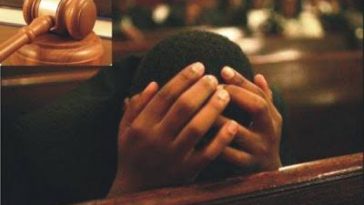 File photo
A 16-year-old boy was yesterday remanded at the Special Correctional Centre for boys in Oregun by a Lagos magistrate’s court sitting in Igbosere.
The teenager identified as Adekunle Ayomikun was remanded after he allegedly hid in the toilet of a bank overnight and stole N340,000.
The defendant, who is facing a count charge of stealing preferred against him by the Police, was docked before Magistrate K. O. Doja-Ojo.
However, the teenager pleaded guilty to the charge against him.
When Magistrate Doja-Ojo asked him, how he got into the bank, Ayomikun told her that he entered the bank around 4 pm during banking hours and locked himself in the toilet.
He said: “After closing hours at night I went to the bulk room of the bank where I saw money, and I took N340,000 and kept it in my pocket.
“I had a lighter with me, so when I was trying to come out of the bank, the lighter attracted the security guards at the bank who saw me, then I ran back into the toilet and locked myself up, again.”
Ayomikun also added that when he eventually came out of the toilet, the security guards searched him and they recovered N340,000, from him.
Earlier, the prosecutor, Inspector Peace Chukwudi, had told the court that the teenager committed the offence on February 19, 2020.
She said the incident occurred at about 8:30 pm, at FCMB branch, Ajah.
Chukwudi said the defendant who stole N340,000, property of FCMB, was represented by one Mary Ikwuako.
According to her, the offence is punishable under Section 28 of the criminal law of Lagos State 2015.
Consequently, Magistrate Doja-Ojo remanded him at the Special Correctional Centre for boys in Oregun. The case was adjourned till April 15.
Top Stories