A former PDP Publicity Secretary, Olisah Metuh has been given a long prison sentence for fraud. 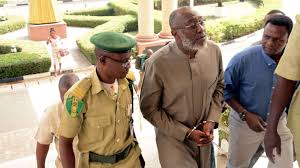 Olisah Metuh
Justice Okon Abang of the Federal High Court, Abuja has given a former Publicity Secretary of the Peoples Democratic Party (PDP) Chief Olisah Metuh a total of 39 years imprisonment.
The sentence was handed down on Tuesday after he was found guilty of engaging in fraud.
Metuh’s sentencing which came after four years of trial was sequel to his conviction in a money laundering charge against him by the federal government.
Metuh and his company, Dextra Investment Limited were arraigned on a seven-count charge bordering on money laundering to the tune of N400 million received from the former National Security Adviser, Colonel Sambo Dasuki (Rtd).
They were also accused of laundering the sum of $2 million and conversion of public funds into private usage.
But the former PDP Spokesman claimed that the said funds were for a national assignment as directed by the then President, Dr Goodluck Jonathan.
However delivering judgment in the case, Justice Abang held that the prosecution was able to establish the ingredients of guilt in all the seven-count charge against Metuh and his company.
Justice Abang accordingly handed down the minimum years as prescribed by section 15 of the money laundering Act.
For count one, the judge sentenced Metuh to seven years imprisonment; count two, seven years; count three, five years; count four, seven years, count five, three years with a fine of N25 million; count six, three years with a fine of N25 million and count seven, seven years imprisonment.
The sentences which are to run concurrently according to the judge comes into effect from the day the judgment was delivered.
While the court ordered the winding up of Dextra Investment Limited and the balance in the firm’s bank accounts be forfeited to the federal government, Justice Abang in addition imposed a fine of N375 million on Metuh.
Top Stories