A SARS officer alleged to have killed Remo Stars Football Club, Tiamiyu Kazeem has been recommended for dismissal. 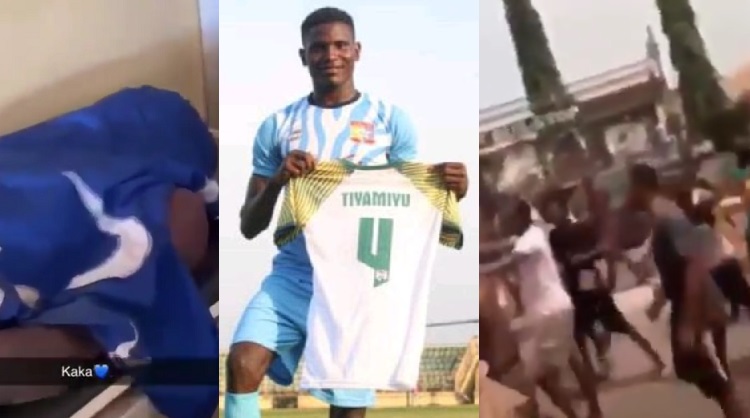 Late Remo Stars Football Club, Tiamiyu Kazeem
The Ogun State Police Command has recommended that the operative of the Special Anti-Robbery Squad allegedly involved in the killing of the Assistant Captain of Remo Stars Football Club, Tiamiyu Kazeem, be dismissed, Punch reported.
The officer according to the command, acted unprofessionally.
The Inspector-General of Police, Mohammed Adamu, had on Monday asked the Deputy Inspector General in charge of the Force Criminal Investigation and Intelligence Department, Anthony Ogbizi, to investigate the matter.
The late Tiamiyu’s family on Monday insisted that he was murdered and thereby called for justice on the matter.
There were protests in parts of the state on Monday as residents took to the streets to show their displeasures over the matter.
State’s Police Public Relations Officer, Abimbola Oyeyemi said the police management team paid a condolence visit to the family of deceased on Monday, promising the protesters that justice would be done on the matter.
Oyeyemi said the SARS operative involved in the arrest of the late Tiamiyu also known as Kaka had been tried in the orderly room.
Oyeyemi said the officer had been recommended for dismissal, adding that the police were awaiting approval from the Assistant Inspector General of Police zone 11, Ahmed Iliyasu, to carry out further action on the matter.
He said, “We have already investigated the man and tried him in the orderly room. We have also recommended him for dismissal but being an inspector, it is not the CP that will approve it and the recommendation has been sent to the AIG zone ll for approval and as soon as it is approved, that guy will be charged to court.”
He added that the police in the state had to do that “because there are lots of misnomers in this issue; first, he embarked on illegal duty, nobody sent him there and when he got there he didn’t deem it fit to book his presence at the Sagamu police station.
“Also, the guy acted unprofessionally because, if he arrests someone from such a long distance, why didn’t he handcuff him? So, his act of unprofessionalism led to the death of the man and that is why he will be charged to court.”
Meanwhile, the Ogun State Government has called on the protesters to leave the streets and remain calm, pledging to ensure that the late Kaka gets justice.
Top Stories