A man playing hide and seek with his best friend's fiancee has finally landed in serious trouble. 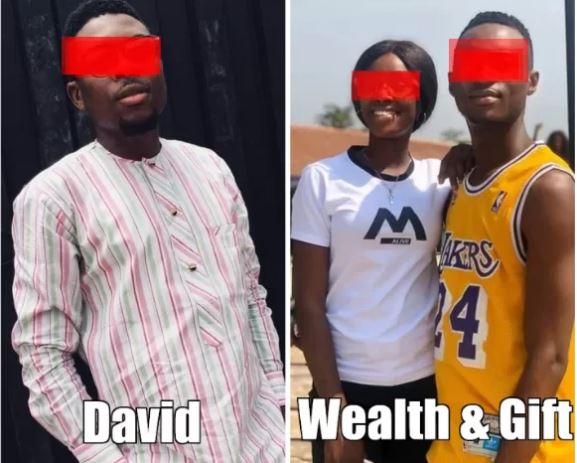 The relationship crashed after man impregnated his best friend's fiancee
A Nigerian man's relationship that would have led to marriage has crashed.
It was gathered that the relationship of the man identified as Adisa Gift crashed after his best friend, David Okocha allegedly impregnated his fiancée, Wealth, a student of Delta state university, Abraka.
According to Kemi Filani News, Gift and Wealth reportedly got engaged in December, 2019, only for their “friend” David to put asunder between them by impregnating Wealth.
David Okocha, 26, an indigene of Ogwashi Delta state Impregnated his best friend’s fiancé after series of “hide and seek” sex sessions with her.
Adisa Gift started suspecting some silly moves between Wealth and his friend David when he noticed that David always visits his home when he (Gift) is not around.
“Some of their neighbors who suspected something fishy between them complained to Gift about his friend’s closeness to his fiancée and wondered what kind of friend he is” The source told Kemi Filani News
Due to their suspicious moves, Gift decided to “set a trap” for them. He lied to his fiancé that he was going to Lagos on a business trip on the 14th of February, 2020 and will be back in three days.
Adisa Gift hid in his neighbor’s house, hoping to monitor his fiancé’s movement.
Adisa Gift reportedly sneaked into his apartment in the middle of the night, only for him to find out that his girl was nowhere to be found.
Unknown to him, his fiancée and his friend, David, had left Abraka, that same day to spend valentine in his younger brother's place in Warri.
“When she came back, Gift demanded to know where she went to, but she couldn’t give a proper answer” the source added.
“But her parents were invited and she was forced to talk, Wealth confessed that she is already pregnant for her man’s best friend and that their relationship started in April, 2019. She also said she seduced him cos she loves him”
Wealth’s parents pleaded with Gift and asked their daughter to follow his best friend, David since she claims she loves him more and is pregnant for him.
As at the time of writing this report, Gift has given Wealth 7 days to leave his house and follow her ‘love’ David.
Top Stories