Controversial actress, Etinosa has attacked Nollywood actress, Inyama for calling her out over her weird behaviour lately. 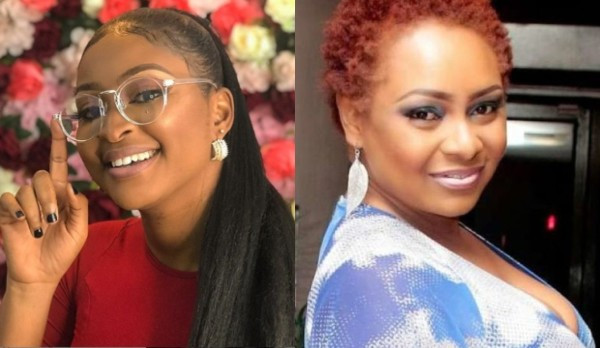 Etinosa and Victoria Inyama
Comedienne and actress Etinosa has lashed out at Nollywood actress, Victoria Inyama over her recent comment about her apology to Apostle Johnson Suleman.
Victoria Inyama had stated that the actress never apologized for desecrating the Bible but apologized to a man that uses the Bible.
This comes after Etinosa yesterday begged Apostle Johnson Suleman for forgiveness after falsely accusing him of having a side chick, because the man of God had condemned those who bleach their skin.
While reacting to Etinosa's apology, Inyama wrote: "When they insult their god daddy... apologise so you don't miss out on a car, cash, house... Merciful God."
"Etinosa who fired back at Victoria Inyama, described her as a "jobless, frustrated and retired old mother who doesn’t know her age and respect herself on?Instagram."
She insisted that she apologized for smoking with the Bible as she accused the veteran actress of peddling lies and gossip to tarnish her image. 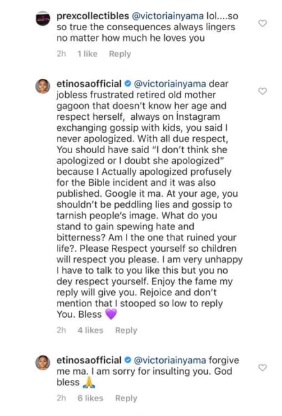