The Nigerian Navy has intercepted 965 bags of rice which was smuggled in Akwa Ibom. 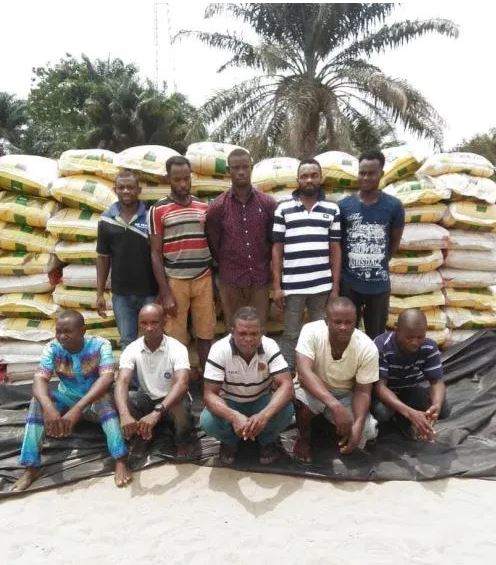 The Nigerian Navy, Forward Operating Base, (FOB) Ibaka in Mbo local government area of Akwa Ibom State, yesterday said it has intercepted a total of 956 bags of rice smuggled into the state.

Yilme who was represented by the Base Operations Officer, Lieutenant Commander Kabiru Yusuf while handing over the suspects and items to the Nigeria Customs Service (NCS) said some suspects were intercepted with bags of rice on Ikang waterways, and others along Unyenge creek.

He expressed concern that the smugglers persists on their illegal activities on the waterways despite warnings, and vowed that the Navy would not rest on its oars until the trade and its sponsors are crippled.

“On behalf of the Commanding Officer, Captain Peter Yilme, I, Lieutenant Commander K. Yusuf hand over ten suspects with 956 bags of 50kg rice to the Nigeria Customs Service.

Superintendent Dauda Abubakar, received the suspects and items on behalf of the Nigeria Customs Service.