Two arms dealers who sell ammunition for as low as N500 have been apprehended and paraded by the NDLEA in Bauchi. 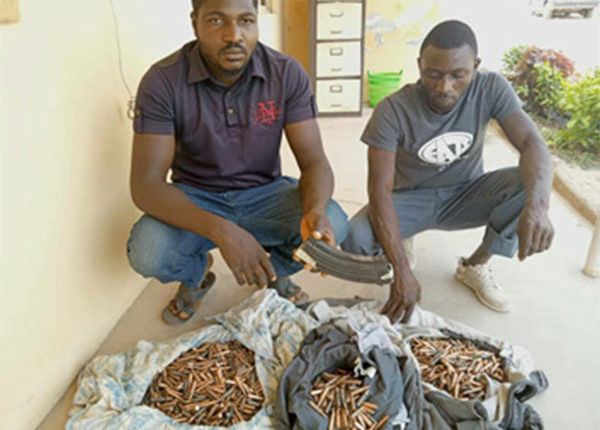 The Bauchi State Command of the National Drug Law Enforcement Agency (NDLEA) have arrested some illegal arms dealers who sell ammunition for as low as N500.

The suspects identified as Dung Bulus Rwang and Dachollum Yohanna, were arrested with 1,360 rounds of live ammunition of 7.6mm calibre during a motorised patrol along Bauchi-Jos Road.  An AK- 47 magazine was also found in the commercial Vectra car the suspects were using to convey the ammunition.

Jonah Achema, spokesperson of the NDLEA in the state revealed that the suspects who neatly concealed the ammunition in two sacks which were kept in the boot of the vehicle, have already admitted ownership of the consignment they were conveying from Numan in Adamawa State to certain buyers in Plateau State.

It was further gathered that they confessed to being in the illegal arms business for a long time. Yohanne who disclosed that each of the ammunition was to be sold for 500 only, said;

“It is a business for us. Things are really hard in this country and we need to sell these items so that we put food on the table for our families."

Segun Kolawole Oke, NDLEA Bauchi State Commander told newsmen that the suspects and exhibits would be handed over to the Bauchi State Police Command for further investigation.

“The origin of the arms and the destination are both areas with rampant misuse of weapons. We therefore cannot take this issue of arms trafficking lightly.”