U.S President, Donald Trump took to Twitter to ridicule billionaire, Mike Bloomberg for quitting the presidential race after spending $500m on his campaign. 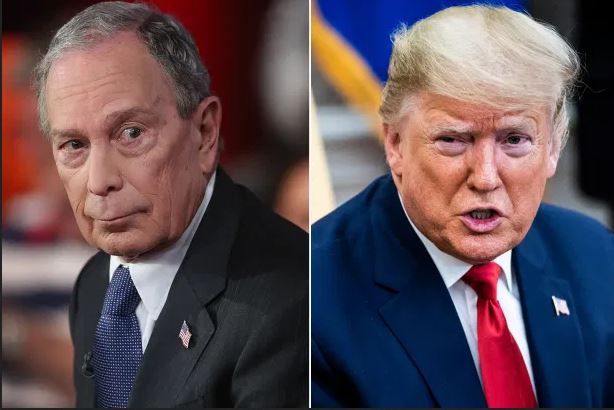 US President, Donald Trump took to his Twitter handle on Wednesday evening to mock fellow billionaire Mike Bloomberg, after the Bloomberg Television founder announced he will be quitting the US Presidential race after spending a whooping $500m on his campain and advertising.

Mike Bloomberg, who spent funds reportedly in excess of half a billion dollars to self-fund his 2020 presidential run, unlike other candidates who sourced for funding from donors and party faithfuls, announced Wednesday that he is suspending his campaign after performing poorly on Super Tuesday and that he will be endorsing former Vice-president Joe Biden.

Bloomberg, a former New York Mayor, is the owner of Bloomberg media, a Media and entertainment company worth 60 billion dollars and entered into the White House race last November after skipping the early states.

After pouring more than half a billion dollars into his campaign and flooding the airwaves with ads, his 101-day-long campaign has been brought to a sudden end.

Although his 2020 campaign is over, Bloomberg committed from the outset that win or lose, he would be involved in removing Trump from the White House, and barely an hour after he announced he will be suspending his presidential ambition, Trump mocked him on Twitter.

''Mini Mike, “Three months ago I entered the race for President to defeat Donald Trump, (and I failed miserably!' Trump tweeted.

''Mini Mike Bloomberg just “quit” the race for President. I could have told him long ago that he didn’t have what it takes, and he would have saved himself a billion dollars, the real cost. Now he will pour money into Sleepy Joe’s campaign, hoping to save face. It won’t work!' Trump continued.

'Mini Mike Bloomberg will now FIRE Tim O’Brien, and all of the fools and truly dumb people who got him into this MESS. This has been the worst, and most embarrassing, experience of his life...and now on to Sleepy Joe!' 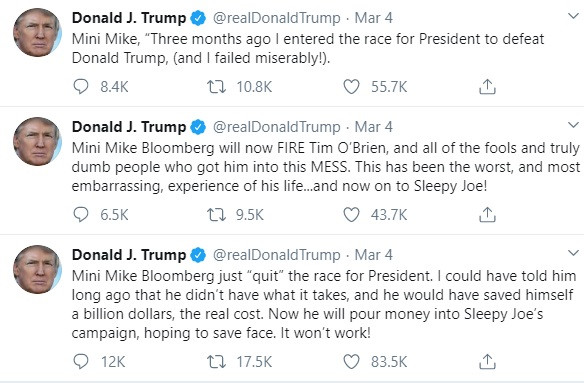