The Governor of Jigawa state and some top government officials have been rescued after being held hostage by aggrieved youths. 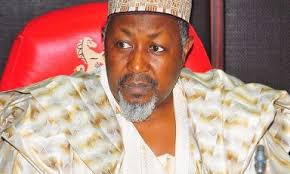 Jigawa State governor, Muhammadu Badaru Abubakar
Jigawa State governor, Muhammadu Badaru Abubakar, Senator Danladi Sankara, Senator Ibrahim Hadejia, Senator Sabo Nakudu and some member of the national and state assemblies and other top government officials have escaped being lynched after being held hostage for several hours in Hadejia town, according to a report by Vanguard.
The aggrieved youths in their hundreds barricade Hadejia central market road, when governor Badaru and his entourage were coming out from emir of Hadejia Palace for a homage visit; the governor was said to be in the town yesterday for a wedding ceremony of one of the sons of an indigenous contractor, Alhaji Isah Gerawa.
Trouble started shortly after governor Badaru accompanied by three senators, some members of the national and state assemblies, as well as top government officials, were coming out from the emir`s palace on their way out of Hadejia town, aggrieved youth blocked the road with vehicles chanting various insult slogans to the governor over his alleged unfulfilled promises of projects completed in the area.
An eye witness spoke on anonymity said information reached aggrieved youth that the governor was in town, as such they mobilized themselves and blockade the road with vehicles chanting “Ba ma yi, Ka yaudare mu, dole ka bai wa Malam mulki” meaning, we not with you, you deceived us with white elephant projects, you must hand over power to your deputy whom we trusted.
The crowd forced governor Badaru and his entourage to become helpless as efforts by security agents to control the aggrieved youths proved abortive, while in the process of security intervention the youth took advantage of smashing windscreen of vehicles in the deputy governor`s convoy with nobody harmed, some politicians ran for safety to avoid sustaining injuries from the stone throw.
The reasons for attacking the governor and his entourage according to reliably source might not be unconnected with the slow face of construction work of specialists’ hospital in Hadejia town commenced shortly after assumption into office and several occasion the governor fixed commissioning date but failed and other projects he initiated for the development of the area but have not seeing the light of the day.
Other unfulfilled promises listed by the source, which the governor promised and have not gone down well with the yearning and aspirations of the electorates of the area couple with the halfhearted attitude of the governor towards abandoning those who struggled for his second term re-election bids and he refused to rewards them with any juice appointments or contract.
The intervention of emir of Hadejia, Alhaji Abubakar Adamu Maje has saved the governor and his entourages from further assault by the aggrieved youth, as the youth raised PDP flags for the governor.
Governor Badaru was said to have blamed former deputy speaker Jigawa state house of assembly, Hon. Ahmed MK for engineering the attack, it was reliably gathered that the governor sent him a thank you message for the rudeness and abuse by Hadejia youth.
Effort to contact the commissioner of information, Mohammed Alhassan Tsubut proved avail as his phone rang several times without picking while a text message sent to his phone was not responded to, at the time of filing this report.
The spokesman of the Jigawa state police command, SP. Abdu Jinjiri confirmed the incident but said the pandemonium is between supporters of member representing Kirikasamma constituency and that of former speaker resulting to the arrest of two people and are currently under police custody.
Top Stories