Nigerian singer, Davido has opened up on what happened when his father first saw tattoos on his body. 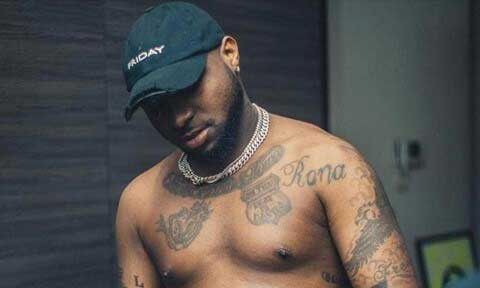 Afrobeat sensation, Davido, has spoken up on his tattoos and how his family – especially his father – dealt with it.

During an interview session on BBC, the ‘1 Milli’ singer revealed that he concealed the tattoos on his hands from his family for about a year but eventually his father discovered it.

According to Davido, his father couldn’t believe as he was shocked seeing the tattoos all over his son’s body.

“After hiding my first set of tattoos from my family dad found out when I came home one day, I was seating in the parlour and I slept off with my shirt off, all of a sudden someone tapped me, it was my dad, he asked what is this, what is this on your hands?”

His billionaire dad then asked some further questions; “Are you going to draw More tattoos? Like draw on your face and other parts of the body?”

And Davido had to respond; “No no I can’t, I will even try to cover this one’s up. Am going to wear agbada to cover it”.

Recently, Davido sent a congratulatory message to his father, Adedeji Adeleke, on the acquisition of another private jet.

The music star took to his Twitter page on Sunday, March 1, 2020, where he shared a photo of his father sitting at the cockpit of his newly acquired jet.

His latest acquisition is a Bombadier Global Express 6000. According to publisher, Dele Momodu, Adeleke’s new jet is worth over $62m.