A man has been apprehended by the police for allegedly beheading a woman in her farm for ritual purpose. 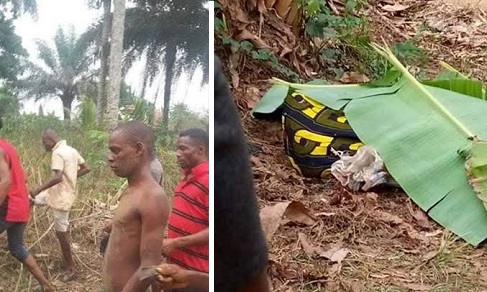 The Akwa Ibom State Police Command has arrested one Lucky Michael for allegedly beheading an 82-year-old woman in her farm.

The suspect, who lives in the same area but originally from Orouk Anam LGA of the state, was said to have beheaded the octogenarian before he was accosted by youths of the community, who later handed him over to the police.

A witness, Augustine Ekwere, said the suspect was allegedly contracted by a prophetess and paid N150,000 to bring a human head for rituals.

Ekwere said the youths stripped the culprit n3ked before he took them to the farm where the body of the deceased was found.

The spokesman of the police in the state, CSP Nnudam Frederick said, “I am in the picture. A woman was beheaded in the farm on Saturday while working there. Some youths joined the police to comb the bush and some suspects were arrested.''