Governor Ganduje's aide made this revelation while speaking during a programme on Silverbird Television. 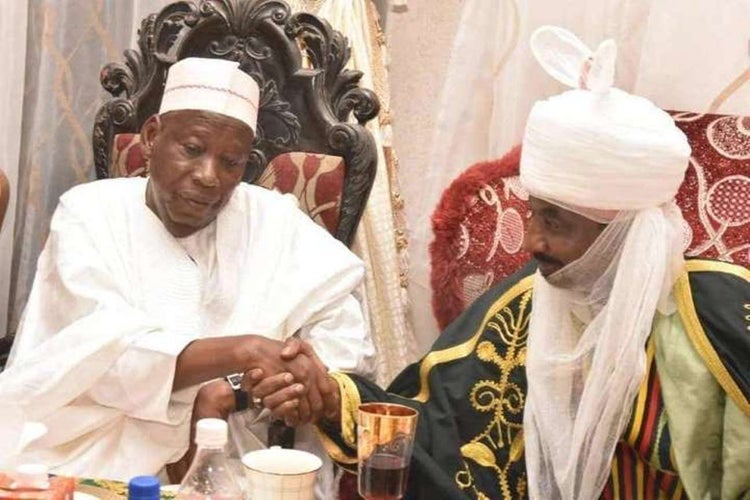 Salihu Yakasi, the Special Assistant to Governor Umar Ganduje on Media and Publicity, has narrated how the crisis between the dethroned Emir of Kano, Muhammad Sanusi II, and Ganduje started.
He spoke during a programme on Silverbird Television monitored by The Punch correspondent.
According to Yakasi, Sanusi’s crisis with the governor started three years ago.
He said the crisis intensified when the former Governor of Central Bank of Nigeria publicly criticised Ganduje at a public event in Kaduna.
He also accused the former Emir of being confrontational with the government, adding that Sanusi was not conscious of the fact that Kano is a conservative state.
Yakasi said, “Let me start from the beginning which is over three years ago. That is the genesis of all this crisis. That was when the dethroned Emir at an event in Kaduna publicly criticised and ridiculed the governor on the issue of the proposed light rail project.
“On that particular project, the Emir has access to the governor, he has the hears of the governor and could easily book an appointment with the governor on his reservation on the project.
“Rather than do that, he went to use the platform of a televised programme. Since that time, the situation kept deteriorating.
“With the creation of new emirates, one would have expected Emir Sanusi to move on with it since the court has affirmed that it was legally done. Since then, the Emir hardly attends any government function and it is mandatory for them to do so. He also refused to send representatives.
“We had one that was very important, which was the launching of free and basic to secondary education in Kano State and integration of the Almajiri project, which was launched by the Vice President (Yemi Osinbajo) at that time. That was a very important project for the State that we had seven ambassadors, members of the international community and ministers. The Emir was in Kano but did not attend that important event.
“So, you find it contradictory that when the government is taking measures for things to get better and address the challenges, Sanusi will not be there to support the government. All these things put together and those we cannot say on record caused what happened.”
He argued that Ganduje exercised caution in dealing with Sanusi.
The governor’s aide accused Sanusi of supporting the Peoples Democratic Party in the 2019 governorship election in the state.
He added, “Nobody will be able to let this go on and fold his arms. The Governor tolerated the dethroned Emir for the last four years.
“The governor only issued one query to the Emir despite the long time that they spent together but during the tenure of the Rabiu Kwankwanso, the state government issued four queries to Sanusi within the short period that they spent together,” he added.
Asked whether the removal of Sanusi on March 9, exactly a year the governorship election held in the state was deliberate, Yakasi said, “Up till Tuesday morning, there was no plan to dethrone the Emir. It was just inevitable. This is bound to happen as long as Sanusi continues the way he does.”
He also clarified that reconciliatory meetings between the governor and Sanusi failed.
Top Stories