Nigerians took to Twitter to shade Gov Sanwo-Olu for asking for relief funds to aid the victims of the Abule-Edo crash. 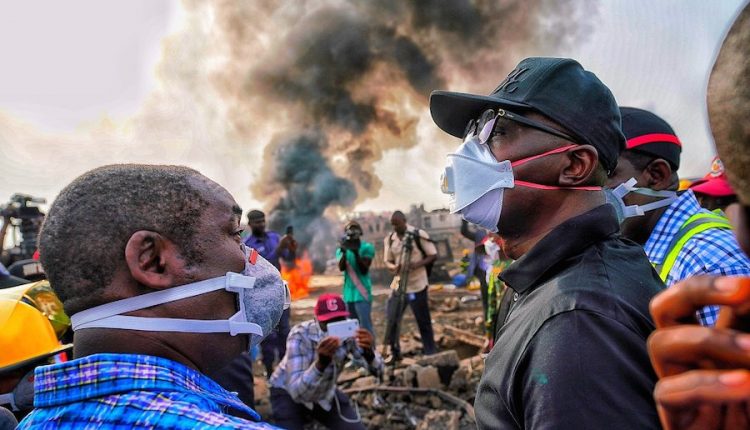 Nigerians have reacted on Twitter, after Lagos state Governor, Babajide Olusola Sanwo-Olu, took to the platform to request for relief funds for those affected by an explosion in the state.

Earlier today, Sanwo Olu was at the site of the tragic incident at Abule Ado, and reportedly set up a N2 billion Relief Fund, to give relief and support to the victims of the disaster.

According to him, the state government has donated N250million into the fund, and he took to Twitter to urge the public to do the same. His Tweet reads;

I appeal to everyone to be a part of helping to provide this much needed relief.”

This has drawn all forms of reactions from the public, with some claiming that a state like Lagos doesn’t need their donation. See reactions below;

@ulsherlan: I would have contributed mine but my transport cost has gone up 300% ever since you banned keke and okada in Lagos state. Thank you sir

@kenstine: Tinubu can donate any amount needed. Is that not what godfather of a state is for? For the fact that he owns Lagos State, he should foot the bill. He should now give back to those he has taken too much from.

@RotimyRudeBoi: This state has taken jobs from people and constantly makes life difficult for entrepreneurs,are these the same people y’all want donations from? LOL

@Ody_johnson: Money from Lekki Toll gate and Ikoyi link bridge toll plus all the money Mc Oluomo boys collect will raise the money in one day.

@architectsunepa: What about money gotten from toll fee? NURTW collections and also several taxes imposed on the citizens by @followlasg

@okeyjames: As the constitutional number one citizen of Lagos state, please tell us how much you are personally contributing to encourage us to contribute.The 250 million is still our money. Thank you as you comply sir

@PeppersoupWorld: My transport has increased by five because I now use Uber to places keke would have taken me for 100 naira. So the money I would have donated has gone for transport. I still pray that all affected find healing and strength in this trying time.