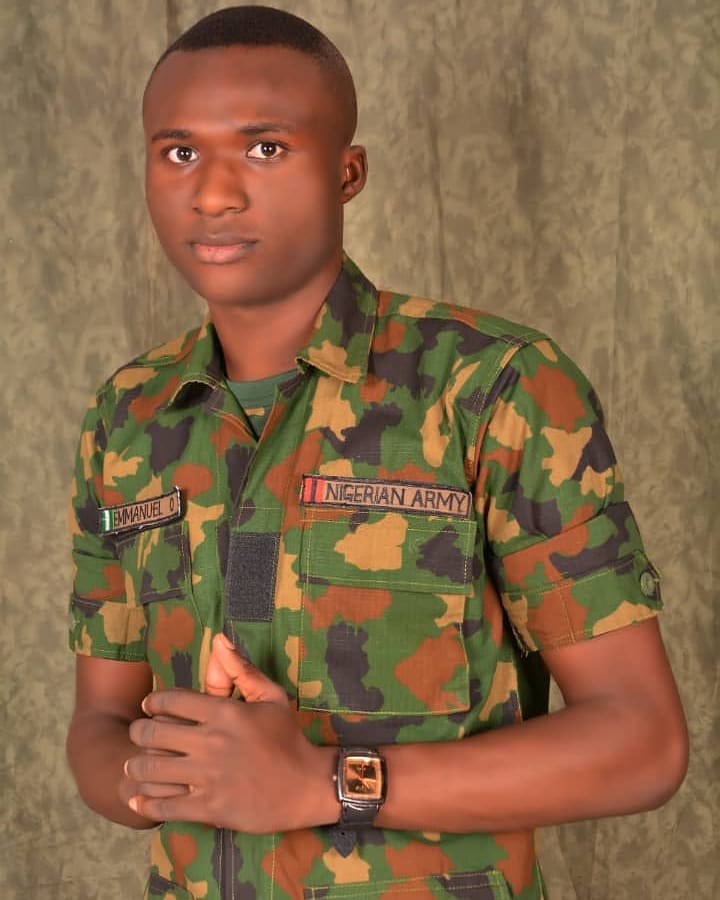 Emmy Benison
A Nigerian soldier, Emmy Benison has shared a part of his life fighting Boko Haram terrorists in Sambisa forest.
In this interview via Famous Naija, he revealed what it is like to come face to face with notorious terrorists.
Can we meet you?
My name is Emmy Benison, I'm from Oturkpo LGA of Benue State. I'm 23 years old. I'm a personnel of the Nigeria Army and I'm also a rapper.
When and how did you join the Nigerian Army?
I joined the Nigeria army in 2014 immediately after my secondary school
Your father and grandfather were soldiers, was that why you chose to join the army?
My grand father and father both served the Nigerian Army and it has nothing to do with me becoming a soldier. At first, my father never wanted me to become a soldier. I joined the army without his consent. My father wanted me to be a banker but I was passionate about serving my father land (smile)
How has it been working as a Nigerian soldier and fighting Boko Haram? Kindly share your experiences as a Nigerian soldier
lolzz.. The war between the Nigerian army and the Boko Haram insurgent is not a child's play. It is something I will never wish to experience in my next life. The Nigerian army is a fearless organization. We are strong, passionate and prayerful and that is the reason we are winning the war against the insurgent. I have faced more than 22 attacks on different locations. I have seen war, felt it and am ready to feel it again as long as am fighting for my country.
Sometime ago, a story that your girlfriend secretly married another guy while you were busy fighting Boko Haram, went viral, what do you have to say about that?
To be honest I was surprise how it went viral. Back then I was hurt, heartbroken and confused but I never let it get in my head because I was in the battlefield and I needed to be on top of my game for the sake of my platoon and my own life. I was demoralized but I never showed it... I miss though (lolz)
So do you have another girlfriend now after your ex left you for another guy?
lolzzzzzzz am working on a relationship though..life must go on na
Also, TheFamousNaija featured your rap video and it went viral as well, how did your superiors in the army react to it?
To be honest with you, some of my superiors were impressed to see a soldier with such talent while some did not take it easy on me.. I bought heavy job (lolz)
Talking about rapping, you are also known as the 'Rap Soldier'. Why the interest in rap?
I have been rapping since i was 13 years old.. I enjoy DA music, I love to rap. I don't mind replacing MI abaga (lolz). The name "Rapsoldier" started from Instagram when phyno reposted one of my videos on his page and a lot of people were surprise to see a soldier drop barz (lolz)
How do you combine rapping with your work as a soldier?
It has not been easy for me though. A lot of people even complain am always in uniform when rapping. The thing is am always busy with the job and I just get to freestyle at any given opportunity. Am always on duty and I can't wear casual wears while on duty. So I get to freestyle with my uniform and even when am off duty, am still in my uniform in case of emergency. It's really been difficult combining the both but God has been on my side for long and am pushing the both gradually.
Don't your superiors scold you for rapping in army uniform?
Like I said, I have been buying job because of that but my passion for music won't allow me hear word (lolz). Discipline is the bedrock of the Army and when it comes to that I don't portray the army in a bad manner with my uniform. It's just for the civil population to understand that soldiers are human too and we have talents like every other person..
What's your most embarrassing moment?
Lolz. That will be some years back in the bush when I was taking my bath and Boko Haram attacked us, I ran outside naked and was fighting without clothes.. E no easy o (Lolz) Some of my colleagues still use that incident to laugh at me.
What are your hobbies and how do you relax?
Well I love rapping, I love playing table tennis and I read books a lot and whenever I am free, I normally hang out with friends to chill..
What advice do you have for other people that wish to join the Nigerian army?
A lot of people want to join the Army for the sake of having a job and not because they want to fight for the country. The army is not an organization that will make you a millionaire. It's a selfless service. You have to be passionate about it. Don't do it for the sake of just having a job or for the sake of the power that comes with the uniform. Do it for your country and make your family proud. It's an honour serving your fatherland.
Lastly, I want to say a huge thank you to thefamousnaija. You've always been supportive and I appreciate it a lot. God bless you so much for everything.
Watch his video:
Top Stories