The death toll recorded from the explosion now stands at 21 after the new corpse recovery. 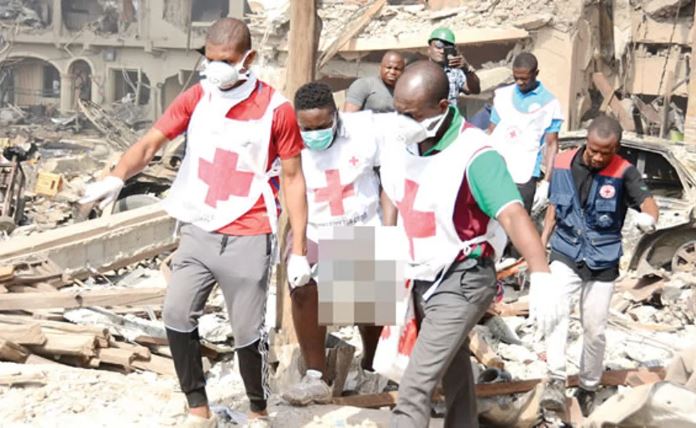 Scene of the explosion

According to a report by Punch Metro, another corpse has been recovered by emergency responders combing the scene of the explosion in Abule-Ado, Amuwo-Odofin Local Government Area of Lagos State.

The death toll recorded from the explosion now stands at 21 after the new recovery.

The PUNCH had reported that some of the victims of the explosion were still missing as their family members were seen at the scene of the tragedy lamenting their whereabouts.

The Director-General, Lagos State Emergency Management Agency, Dr Oluwafemi Oke-Osanyintolu, said the corpse was recovered on Thursday, adding that the explosion displaced 468 persons from their homes.

He said, “The teams continue to carry out recovery and salvage operations at the incident site. An additional body was retrieved today bringing the total number of fatalities to 21.

“468 people were displaced from their homes and 100 of them are now in a relief camp. Two missing. Our help desk remains manned and our personnel are available to manage enquiries and arrange transfer to the LASEMA relief camp for those who have need of shelter and food.

“We appeal for calm and urge members of the public to keep away from the scene.

“We will continue to provide updates.”