As many as sixteen governors, as well as service chiefs, are now at risk of coronavirus after meeting with Abba Kyari. 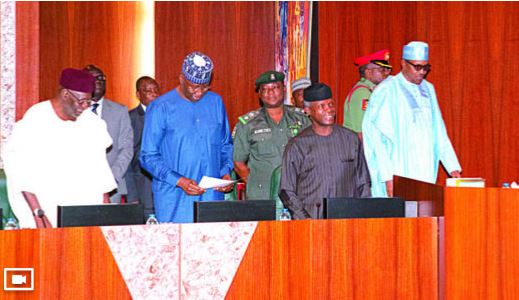 The coronavirus (COVID-19) pandemic, yesterday, exhibited its clout for upsetting human activities at the top echelons of the Nigerian government.

Shortly after reports that Chief of Staff Abba Kyari tested positive to the virus, the Presidential Villa in Abuja was no longer the same. It retained all the trappings of a nation’s power core, but ripples of apprehension had already set in.

“All new cases have mild to moderate symptoms and are currently receiving care. A multi-sectoral national emergency operations centre, activated at Level Three, continues to coordinate the national response activities.”

The villa immediately began a gradual lockdown, with a directive to non-essential staff and those who had come in contact with Kyari to stay away for two weeks.

This was as three workers in Kyari’s office reportedly tested positive to the virus, while their principal himself has since been flown to an intensive care unit in a Lagos hospital.

A source, which craved anonymity, also said Vice President Yemi Osinbajo has already embarked on self-isolation, a reason he did not report to the office yesterday.

The presidency further announced it would scale down the number of media organisations permitted to cover its activities. The decision, which takes effect today, is expected to trim the number of persons who visit the Presidential Villa daily, in line with the need for social distancing.

But the impact of Kyari’s positive test to coronavirus may only become clear with the passing days. Widely regarded as the most powerful man in the Buhari presidency, his position meant he had daily contacts with almost every important personality who came to the Presidential Villa, and coronavirus thrives on contacts.

According to a list drawn by the Coalition of United Political Parties (CUPP), yesterday, Kyari has recently come in contact with the vice president, all the ministers, Secretary to the Government of the Federation, Head of Civil Service of the Federation, Comrade Adams Oshiomhole, all the 16 All Progressives Congress (APC), governors who attended the APC leadership peace meeting on March 16 where Oshiomhole’s case was decided, Bayelsa State governor who also visited the president on March 17, the Speaker of the House of Representatives, who also met with the president on March 16, all who attended the inauguration of the Emergency Number 112 by the president on March 19, all staff of the Villa and all the Heads of Security agencies.

Others are all the Service Chiefs who visited him for the security briefing, all the Heads of Departments, Agencies and Parastatals, diplomats and foreign dignitaries, security personnel around the Villa, particularly those close to the Chief of Staff, the family, personal and domestic members of staff of Kyari, including his driver and orderly, any other friend, associate, a colleague of his who may have met with him within the time, every member of the presidency cabal who may have met with him for strategy within the time; president of Guinea Bissau and all his entourage and any other Nigerian who must have visited him within the time.

Mohammed, his family, and commissioners have already gone into self-isolation, said Mukhtar Gidado, the media aide to the governor.

The opposition Peoples Democratic Party (PDP) meanwhile charged Buhari to douse public anxiety by addressing the nation immediately on the status of the presidential villa in relation to COVID-19.

The party said its demand is predicated on concerns about health safety issues in the villa, following reports that Abba Kyari tested positive to the virus.

In a statement by its national publicity secretary, Kola Ologbondiyan, the PDP said: “An address on the situation in the Presidential Villa will further douse public concerns about the status of certain key officials, who have not been visible in the last few days.”

It said Nigerians, no matter how highly placed, should adhere strictly to directives by relevant agencies of government on health safety measures, particularly as they relate to the isolation of persons returning from foreign trips.

The PDP urged the Nigeria Centre for Disease Control (NCDC) to move into the Presidential Villa and immediately track and isolate all those who had made contact with President Buhari’s Chief of Staff, so as to check further spread of COVID-19 in our country.”

The party called on Nigerians to remain vigilant and observe all health safety directives, including social distances, self-isolation, personal hygiene and prompt report for medical assistance in the case of any symptoms.

Also, the Senate yesterday adjourned its sitting for two weeks “due to the pandemic of coronavirus ravaging the entire world. Therefore, the Senate resumes on the 7th of April,” said Senate President Ahmad Lawan.

Also, the chairman, Senate Committee on Health, Ibrahim Oloriegbe, told journalists, following the adjournment, to discountenance reports that some senators, who recently returned to the country from foreign trips, tested positive for coronavirus. “So, far, there is no senator that has tested positive,” he affirmed.

Besides adjourning for two weeks, the House of Representatives, yesterday, passed a bill designed to cushion the effect of the pandemic.

Sponsored by Speaker Femi Gbajabiamila and other principal officers, the piece of legislation is entitled: A Bill for an Act to Provide for Relief on Corporate Tax Liability, Suspension of Import Duty on Selected Goods and Deferral of Residential Mortgage Obligations to the Federal Mortgage Bank of Nigeria for a Fixed Term to Protect Jobs and Alleviate the Financial Burden on Citizens in Response to the Economic Downturn Occasioned by the Outbreak of COVID-19 Disease and for Related Matters.

Part of the bill states: “Notwithstanding the provision of any other law in force in Nigeria, any employer duly registered under Companies and Allied Matters Act (CAMA) Cap C20 LFN 2004, which maintains the same employee status without retrenching their staff as at 1st of March 2020 till the rest of the year ending 31st of December 2020 shall be entitled to 50 per cent income tax rebate on the total of the actual amount due or paid as Pay As You Earn (PAYE) Tax under the Personal Income Tax Act Cap C8 LFN 2004 (as amended).”

MEANWHILE, a consignment of medical supplies from the Jack Ma Foundation, to assist Nigeria in the fight against coronavirus arrived Lagos yesterday.

Jack Ma is a billionaire Chinese tech titan and founder of Alibaba.

The supplies arrived aboard an Ethiopian Airlines cargo plane at the Murtala Muhammed International Airport (MMIA) at 3:20 p.m. They include 20,000 laboratory diagnostic test kits, 100,000 medical masks, and 1,000 protective suits and face shields.

This was as the Federal Government disclosed that all international airports would remain closed for four weeks, with exemptions to some essential flights.

Minister of Aviation Hadi Sirika, via his Twitter handle, said: “All international airports remain closed for four weeks as said, except for aircraft in distress. The following are also exempted but with prior approval from the Minister of Aviation in advance. They are, humanitarian, medical and relief; cargo, technical, alternate and safety.”