The governor made this revelation while briefing journalists at the Government Secretariat, Abere, Osogbo. 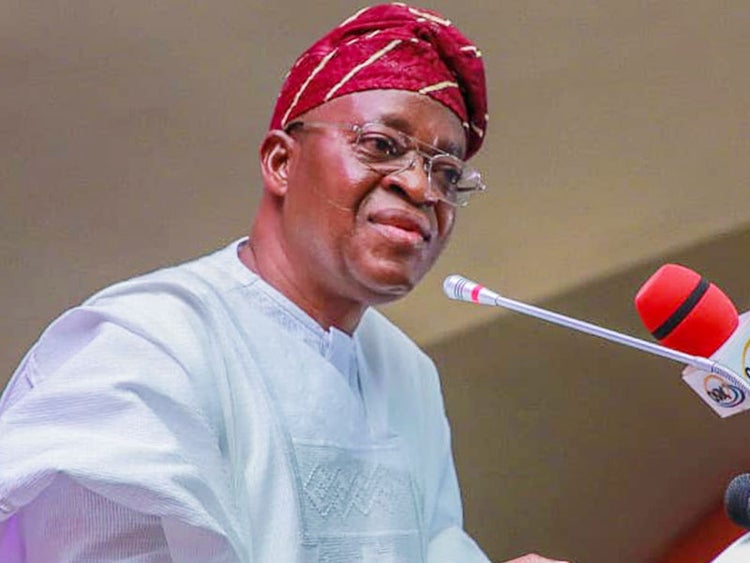 According to The Nation, following the recent confirmation of COVID-19 in Osun State announced by Nigeria Centre for Disease Control (NCDC) in the early hours of Wednesday, the Osun State governor, Adegboyega Oyetola has said he has subjected himself and wife to coronavirus test and it came negative.

The governor said this while briefing journalists at the Government Secretariat, Abere, Osogbo on the first confirmed case in the State.

Oyetola said, “Considering the fact that I was in Abuja for the better part of last week, as a way of leading by example, I have also subjected myself to test. My wife, because of her recent travel history also subjected herself to test. Both came back negative.

Oyetola said the index case involved a returnee from the United Kingdom and he was tested at NCDC accredited center in Ede.

His words, “My dear people of Osun State, recall that I addressed you about two days ago concerning the measures we had taken to wage the war against Coronavirus.

“Sadly, I want to say that we have the first confirmed case of the novel Coronavirus in the State. It was confirmed by the Nigeria Centre for Disease Control, NCDC.

“The case is a returnee from the United Kingdom and is currently receiving treatment.

“The sample was tested at NCDC accredited Testing Centre, which is the African Centre of Excellence in Genomics of Infectious Diseases, Ede, Osun, and the result returned positive on Tuesday night.

“However, this confirmed case is not the first one we will be subjected to an investigation. But so far all the others have tested negative.

“The Government had contacted the family of the patient and has since commenced contact tracing to identify people who might have been in contact with the confirmed case.”

“To this end, I want to passionately encourage all returnees from UK, US, Europe, the West African Coast and indeed other high-risk countries to self-isolate and submit themselves to test, so as to assist the government in containing the spread of the virus. The Emergency number to call is 293. Other numbers are 08035025692, 08033908772 and 08056456250.

“I want to urge you all to continue to observe necessary precautionary measures by regularly washing your hands with water and soap and also maintain the prescribed social distance.

As part of our efforts to curb the spread of Coronavirus in the State, we have set up holding centres and the one in Asubiaro Specialist Hospital, Osogbo, is up and running, to isolate and treat suspected and reported cases of the virus in the State.

Also speaking at the briefing, the Commissioner for Health, Dr. Rafiu Isamontu said, twenty Judges who returned from United Arab Emirate are on self-isolation.

Giving more details about the confirmed cases he said, “I spoke with him while he was in Lagos while he was on his way and he promised to get in touch with me as soon as he gets to Osun State. When he gets Ikire, he continuously rings my phones till he gets to Osogbo.”

“He never hid from the check, the case was the self-reported case because he wanted to be sure if he had contacted the virus. He doesn’t want to go home to avoid infecting his family with it. He has been cooperating so far”