How I Established Enugu, Ebonyi Universities With N3 Million - Nwobodo


The Second Republic Governor of old Anambra State, Senator Jim Nwobodo has told of how he established Enugu and Ebonyi universities. 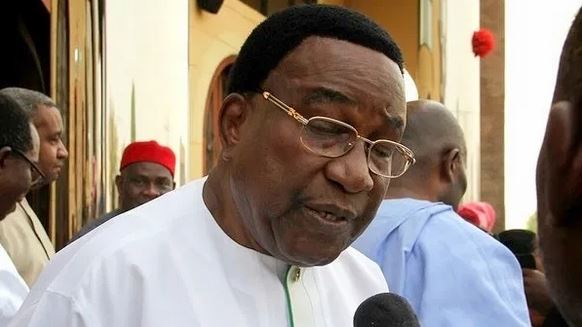 According to Vanguard, it was nostalgic hearing the Second republic Governor of old Anambra State, Senator Jim Ifeanyichukwu Nwobodo narrate how he established the present Enugu State University of Science and Technology, ESUT, Ebonyi State University, EBSU and Nnamdi Azikwe University, NAU, with a paltry three million naira (N3m) in 1980.

He said he was scorned, laughed at and ridiculed for proposing an establishment of a state university, at a time when the better-funded federal universities were in vogue. Worst still, Nwobodo said those who did not have his type of foresight never believed he would succeed with a University of Technology, the first of its kind in West Africa, as that time.

Nwobodo, however, said that there was a compelling need for the establishment of the now defunct Anambra State University of Science and Technology, ASUTECH, with a-three campus structure at Enugu, Awka and Abakaliki, which latter metamorphosed to the present ESUT, NAU, and EBSU.

He said that one of the reasons for establishment of the then ASUTECH was to bridge the wide gap in obtaining university education by bringing it closer to the people at reduced cost for the less privileged students desirous of attaining higher education.

Nwobodo disclosed that on the day the University was unveiled, he invited Africa statesman late Dr. Nnamdi Azikwe, his friends from Northern Nigeria such as Alhaji Abubakar Rimi, Chief Solomon Lar and Adisa Akinloye from the west, who all made good remarks and prayed for the progress of the university.
ALSO READ: Establish regional security now, Nwobodo charges South East govs

Posterity has seen ASUTECH produce most of today’s leading engineers that are now Nigeria’s proud leaders in the Oil and Gas sector, Chemical and water Engineering, Civil and Electrical works, as well as in other endeavors, including law practice and administration, including Governor Dave Umahi of Ebonyi State.

The original design of ASUTECH was a multi-campus structure with different faculties sited in the three campuses of Enugu, Awka and Abakaliki. Nwobodo went extra mile to bring home renowned Igbo academicians and technocrats that held the ace in America, Europe and in Asia as at that time, including Prof Kenneth Dike who was Nwobodo’s Vice Chancellor at the University of Ibadan, to become ASUTECH’s first President as the university Vice Chancellor was then referred to.

While the Enugu campus of ASUTECH maintained the Engineering Faculty and others, the Awka campus majored in Law and Social Sciences, while the Abakaliki campus was renowned for the Agriculture faculty.

These three universities had at one time or the other recognized Senator Nwobodo as ‘the Man who saw tomorrow’ and lauded his foresight, including the honour bestowed on Nwobodo on March 14 by the Ebonyi State University’s award of Doctor of Law (LLD Honoris Causa) during its 7th  to 11th  convocation ceremony in Abakaliki.

In line with Nwobodo’s philosophy, the Governor Ifeanyi Ugwuanyi administration in Enugu State has concluded plans to return ESUT back to its multi-campus structure at Enugu, Nsukka and at Awgu; just like Governor Dave Umahi has proposed same for EBSU.

Nwobodo said “I am proud that I was the first to establish a University of Technology in Nigeria and nobody else. I did it and when I was doing it, people were laughing; federal government laughed at me and how much did I use to start it – N3 million. Three million naira.

I used to start three campuses: one million for each of the three campuses, and it was like a play and we started growing and money started coming because no parents – no father, no mother will joke with the education of his or her child.”

At the EBSU convocation, Nwobodo charged the graduants to be positive with life.

He advocated for multi campus structures, noting that it helps to promote grassroots education, create jobs and afford the less privileged opportunities to attend higher education.

He also  charged governors of the South East zone to make haste and establish regional security in the mode of Amotekun without delay, lamenting that there were many deaths in the region as a result of insecurity.

He said that the only thing the governors can do now is to bravely establish a regional security outfit and ensure that all the State Houses of Assembly in the zone passed laws to back it up and forget about community policing which he noted had been there without achieving the desired result.

He decried that people in the zone no longer went to the farms because of insecurity in there domain.

Nwobodo said “My advice to our leaders, particularly the governors is that they should be bold and take things straight on once their conscience tells them that what they are doing is right.

The job of a leader is the security and welfare of his people. If you must lead, you must secure them, you must show them you care for them and the only way you can care for them is you don’t joke with them.

“There is a difference between being careful and being afraid. I want our governors to work as a team and build unity. I want them to take seriously the issue of security because we have lost many lives and I think that I really like what the South west governors did by coming together and introducing joint security code named Operation Amotekun and they succeeded.”