A man who killed another man suspected to be having an affair with his wife, has made a startling confession. 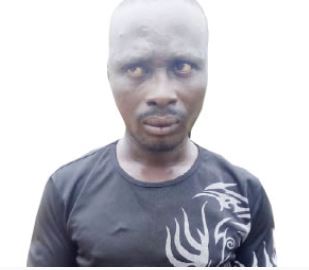 Habib Kasali, a 35-year-old motorcyclist was arrested by police officers of the Ogun State Police Command for allegedly killing a man in his community at Ibafo area of Ogun State with a pair of scissors after suspecting the victim was having an affair with his wife. He tells DAUD OLATUNJI his side of the story

When did you marry your wife?

We have been married for over six years and we have one child.

How did you get into trouble?

In fact, one of his superiors who I reported him to told me that he also knew that he was dating my wife and had tried all he could to stop him but all to no avail.

Later, I went to report to the Baale (traditional leader) of our community and the Baale said I should bring my mother. So I went there with my mother and my wife. When we got there, my wife was asked if she was still interested in me and she said yes, but despite that she didn’t give me any rest of mind. She was coming in late and if I asked her where she was coming from, she would say she was coming from the salon and it had been going on like that. Again, I called his friends and they also confirmed my findings to me; I left them feeling very sad.

So on Saturday, I went to buy liquor from a woman selling herbs and on getting there, I saw my wife and the guy eating from the same plate, that was how a fight broke out between us. In the course of the fight, I saw a pair of scissors and I used it to stab him in three places. That was how he died.

Where did you stab him?

Close to his eye, chest and stomach area, but I never wanted to kill him. In fact, before that day, I had begged him to leave my wife alone. I am not promiscuous and I only love my wife but he never listened.

How well did you know the victim?

He was one of the cult boys in our area whom I gave money anytime they asked me for money.

Are you a member of the same cult group with the deceased?

No, I am not a member of any cult group. Everybody in our community knows that I am not a cult member.

Since you got into detention, has your wife been here to see you?

No, she has never been here. I have not seen her.

What about your family?

I don’t know if my family members are aware that I am in trouble, especially my mother. If anyone had told her, she would have been here.

Or are they ashamed of identifying with you?

No, I have relatives and they will definitely come here if they are told about my predicament.

Did your mother ever warn you about the danger of not being able to control your anger?

Yes, she always warned me against having anger and that was why I didn’t want to fight initially but my disobedience to her warnings has landed me into trouble.

If you get out of here, what kind of relationship will you have with your wife?

I will do nothing to her but I will have nothing to do with her again. I will ensure that I cut off every tie between us. The only connection that will remain between us is our child. Before the incident, I had spoken to her on many occasions about her adulterous ways but she never listened, so if I accept her back, she will just continue in her adulterous ways. In fact, her grandmother was tired of the matter because I reported the matter to her every time to the extent that my wife even thought I was bribing her to support me.

What is going on in your mind right now?

I can’t explain what is going on… (He bursts into tears).