The riot was caused by the arrest of a religious group leader who allegedly led a Friday prayer in the town. 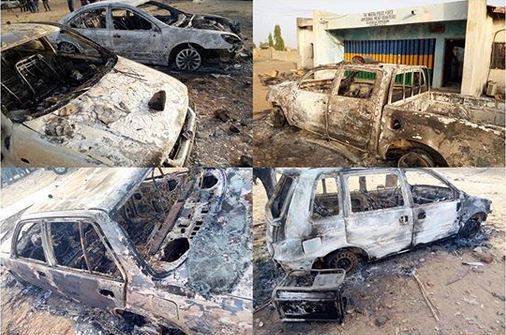 Photos of the destroyed station and cars

According to a report by The PUNCH, at least, one person lost his life on Saturday when a police station and the official quarters of a Divisional Police Officer were burnt down in Kusada, headquarters of Kusada Local Government Area of Katsina State.

The riot was caused by the arrest of a religious group leader who allegedly led a Friday prayer in the town despite the state government’s directive banning large gatherings to prevent the spread of coronavirus.

Seven vehicles and 10 motorcycles were also set ablaze during the riot.

Ninety suspects have also been arrested in connection with the incident.

Eyewitnesses said trouble started when one Mallam Hassan conducted Jumat prayer in one of the mosques in the town.

Hassan was consequently arrested and taken to the police Area Commander’s office in Malumfashi for questioning. The development did not reportedly go down well with some of his followers.

The followers were alleged to have on Saturday attacked policemen on duty at Kusada Police Division and torched the police station and the DPO’s Quarters.

They were also alleged to have burnt down seven vehicles and 10 motorcycles on the premises of the police station.

The town was not accessible for several hours on Saturday because of the incident.

The spokesman for the police in Katsina, SP Gambo Isah, who confirmed the development, said normalcy had returned to the town while investigation had begun on the incident. 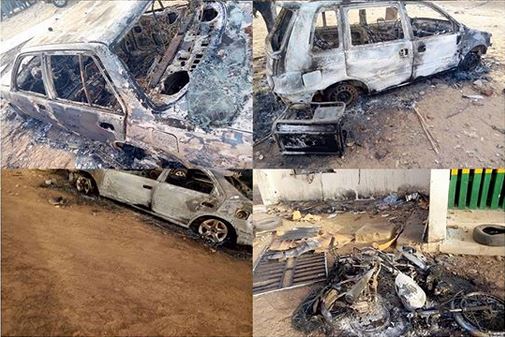 He said, “Recalled that Katsina State Government under the leadership of His Excellency, Governor Aminu Bello Masari, issued a restriction orders Nos. SEC.2/T/3 and SEC.2/T/14 dated 25th and 27th March, 2020 respectively, directing the total closure of its borders and suspension of large gatherings for the weekly Friday prayers and Sunday church services while marriage ceremonies are to be conducted in a low key across the state as part of measures taken to curtail the spread of the coronavirus pandemic.

“However, on Friday, March 27, 2020, some disgruntled youths under the leadership of one Mallam Hassan tested the will of the state and conducted a Friday prayer in one of the Kusada jummat mosques.

“Subsequently, he was arrested for questioning at Area Commander’s office, Malumfashi which did not go down well with some of his followers.

“Consequently, today (Saturday) around 9am, this particular group organised themselves in a tumultuous manner, attacked and overpowered the policemen on duty at Kusada Division, set ablaze the police station and the DPO’s Quarters. They also burnt down seven vehicles and 10 motorcycles in custody of the police station.”

Isah stated that the Commissioner of Police in the state, Sanusi Buba, ordered the deployment of police patrol teams and a special joint security task force on the enforcement of public gatherings in the state to the area.

“Ninety suspected rioters have been arrested while one of the rioters lost his life as a result of the encounter. Investigation is ongoing,” he added.

Meanwhile, Isah said the police in cooperation with repentant cattle rustlers have rescued an eleven-year-old girl, Maryam Ado, from suspected bandits who kidnapped her from Kunkunna-Bayan-Dutse, village in the Safana Local Government Area of Katsina State. Ado was rescued about 11am on Friday.

Isah said Ado was rescued unhurt after a gun duel between the rescue team and the suspected bandits.

He said, “On March 27, 2020, around 11am, the command in collaboration with repentant cattle rustlers led by one Sani Muheddinge rescued one Maryam Ado, aged 11, of Kunkunna-Bayan-Dutse village, from the hands of kidnappers after the exchange of gunfire.”

The command spokesman said six suspected bandits armed with AK 47 rifles, on Wednesday stormed the village during which Ado was kidnapped and abducted to Rugu forest.

It was however learnt that Ado was reunited with her family shortly after her rescue on Friday.

Isah said investigation had commenced on the matter.