An update has been given by the Nigerian army concerning general who complained about the poor equipment given to soldiers fighting Boko Haram. 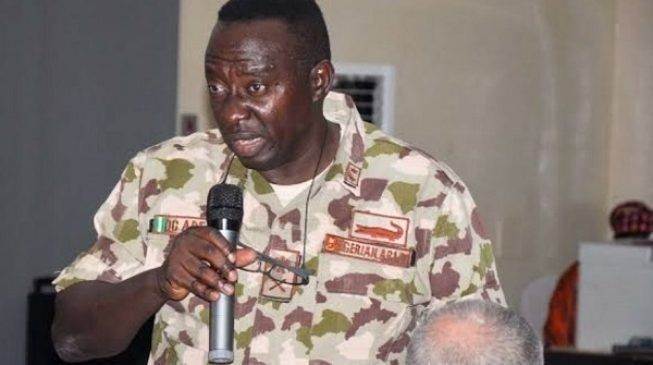 Maj. General Olusegun Adeniyi
The Nigerian Army has confirmed that the Theatre Commander of Operation Lafiya Dole, Maj. Gen. Olusegun Adeniyi who complained in a viral video that Boko Haram terrorists have better equipment than soldiers has now been replaced.
A statement issued by the army on Tuesday confirmed that Adeniyi has been replaced by Maj. Gen. Faruk Yahaya.
The redeployment affected no fewer than 13 Major Generals and Brigadier Generals, the army said.
Adeniyi, who was seen two days ago in a viral video reportedly complaining about the state of fighting equipment in the North-East, has been moved to the Nigerian Army Resource Centre as a Senior Research Fellow.
The acting Director, Army Public Relations, Col Sagir Musa,  said in a statement  the redeployment  was  to “rekindle the spirit of professionalism and  approved by the Chief of Army Staff, Lt Gen Tukur Buratai” in a routine exercise intended to reinvigorate the system.
Musa said, “The major highlights of the posting include the posting and appointment of Major General  A.C. Agundu from  the Special Task Force, Operation Safe Haven, to the Nigerian Army Resource Centre, Abuja, as a Senior Research Fellow; Major  General  H.I. Bature from  Defence Headquarters, Liaison Office National Assembly, Abuja, to the Army Headquarters, Department of Civil Military Affairs and appointed Chief of Civil-Military Affairs.
“Also, Major  General  U.M. Mohammed from Nigerian Army Property Limited (has been moved) to the Office of the Chief of Army Staff and appointed Special Adviser, Nigerian Army University, Biu.
“Major  General  F. Yahaya has been moved from  Headquarters, 1 Division, Kaduna, to Headquarters, Theatre Command, Operation Lafiya Dole, Maiduguri,  and appointed Commander, while Major  General  O.G. Adeniyi is redeployed from Headquarters, Theatre Command to the NARC as a Senior Research Fellow.”
The army spokesman also  said the exercise  affected some brigadier generals and some colonels.
He said, “The  postings and appointments take effect from April 1. While wishing all the officers well in their respective appointments, the Chief of Army Staff enjoins them to take their new responsibilities and appointments seriously and discharge all duties professionally with utmost loyalty to the country.”
Top Stories