The stay-at-home order issued by Pres. Buhari has been defied as residents cite hunger as a reason. 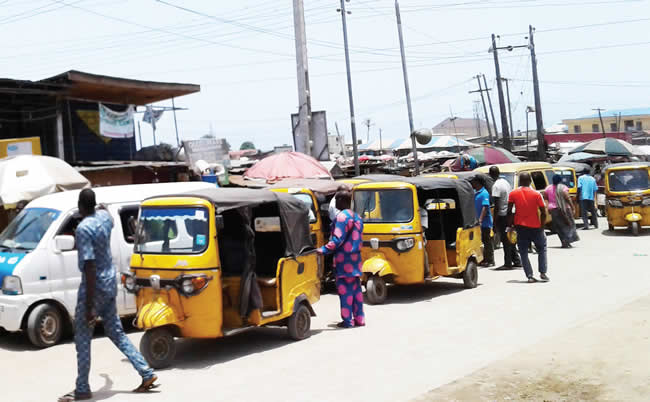 Residents of some communities in the Federal Capital Territory, Ogun and Lagos states on Sunday violated the President,  Muhammadu Buhari’s lockdown order.

On Saturday and Sunday, PUNCH observed that although there was compliance with the order within the Abuja metropolis, residents of its suburbs who cited hunger,went out contrary to the government’s directive.

In Ogun State, the Deputy Governor, Noimot Salako- Oyedele ,in a statement on Sunday, decried the level of compliance in the Ado -Odo /Ota Local Government Area .

Residents of Lagos areas such as Iyana -Ipaja , Ketu and Alapare cited hunger for violating the lockdown.

The President had, in a nationwide broadcast on February 29, imposed 14- day lockdown on the FCT, Lagos and Ogun states to curb the spread of COVID- 19 cases, which increased to 232 on Sunday.

In the FCT , security personnel consisting of the police and the Federal Road Safety Corps officials chased away traders from Kuje market in the Kuje Area Council on Sunday.

One of our correspondents, who was in the area between 2pm and 3pm, observed that while the market was locked , traders displayed their goods at its entrance.

On sighting the security men, some traders took to their heels and abandoned their wares which included clothes,food and cosmetics.

However , the security men were civil with those who had the courage to stay behind . They appealed to the traders to respect the sit-at-home order.

A barber, who gave his name simply as Tunde, was working in his shop not far away from the market .

He told The PUNCH that security men regularly patrolled the area to enforce the order.

He said ,“The security officials, especially policemen, have been coming here very often. Some of them insist that I close my shop , but others allow me after convincing them that mine is an essential service . ”

Commercial motorcycle riders , popularly known as okada in Kubwa , one of the major satellite towns in Abuja , defied the lockdown.

Okada riders were seen in most of the streets in Kubwa on Sunday, as they moved passengers from one location to another .

On the Arab Road , Byazhim, Kubwa Village Market , among other areas, for instance, the riders transported passengers who patronised them.

On why he was not obeying the lockdown , a rider , Umar Gambo , told one of our correspondents that it “ was difficult” for him to stay indoor continuously because he needed to fend for his family.

The rate of compliance in Bwari on Sunday was not as high as it was when the lockdown started last week.

One of our correspondents, who went around Bwari between 1pm and 2pm, observed that many shops, markets ,filling stations and pharmacies were opened .

Unlike the first two days when the roads were almost empty, there were movements of vehicles and commercial motorcycles .

Taxi drivers in the FCT , particularly in the Dei- Dei and Zuba areas, started work on Sunday.

The PUNCH observed many taxi drivers resorted to wearing face masks and conveyed three passengers on the back seats, while squeezing two others in front .

In Zuba ,it was observed that the drivers had increased their fares .It was gathered that they bribed policemen in order to operate, particularly from late afternoon and evening .

“ We cannot stay at home . We have to eat . We should wear face masks. I think that is enough. Some of the policemen are cooperative . They also understand that we cannot survive without working, ” a driver, Sanni Ahmed, said .

Residents of communities in Lagos State told The PUNCH that hunger was responsible for their noncompliance with the lockdown .

While some residents observed the stay-at- home order, others, including commercial motorists, were seen flouting the directive. They cited different reasons including hunger and illnesses when accosted by law enforcement agents.

When asked why she decided to disobey the stay - home directive, one Iya Rukayat , a bag seller in Ketu , said hunger prompted her to display her bags for sale. She added that she fed her family from her daily income.

She said , “ At first , I observed the order, but it got to a point that there was no money to feed my family, so I had to come out to sell my bags. I just started displaying my goods this morning and I have not made any sale . I cannot just stay at home when my family is hungry .”

Speaking on condition of anonymity, another resident of the Alapere, said she had not benefitted from the foodstuffs donated by state government .

In Ogun State, street urchins, cultists and some traders defied the sit-at - home order.
The lockdown, which commenced in the state on Friday night, recorded substantial compliance in many parts, but some residents of Sango -Ota and Ewekoro did not stay at home.

Some miscreants in Ota defied the restriction of movement in the area while scrambling for foodstuffs donated by the state government .

An eye witness, who spoke on condition of anonymity, said the miscreants besieged the Ado -Odo / Ota Local Government headquarters following an announcement that foodstuffs would be shared in the place.

According to the source ,the miscreants ran amok when they failed to get their share of the foodstuffs .

The deputy governor , in a statement by her press officer, Seun Boye, frowned upon the poor level of compliance by some residents of the local government area.

She was said to be on an assessment of the Ado - Odo / Ota and the Yewa South Local Government areas.

She said , “ On the violators, I have met with Ota Area ( police ) commander on my way and let me reiterate that the law must be obeyed and nobody would be spared.
“ We will also continue to engage our law enforcement agencies to make sure that they support us to be able to achieve our mission. ”

Also, the cultists in the Ifo Local Government Area of the state defied the restriction of movements in the area when they clashed.

The Police Public Relations Officer in the state, Abimbola Oyeyemi, while confirming the incident , said the cultists made a mess of the order.

He said the clash between two rival groups claimed one life. He added that four people had been arrested.