The US Mission in Nigeria made this revelation known in a statement released on Thursday. 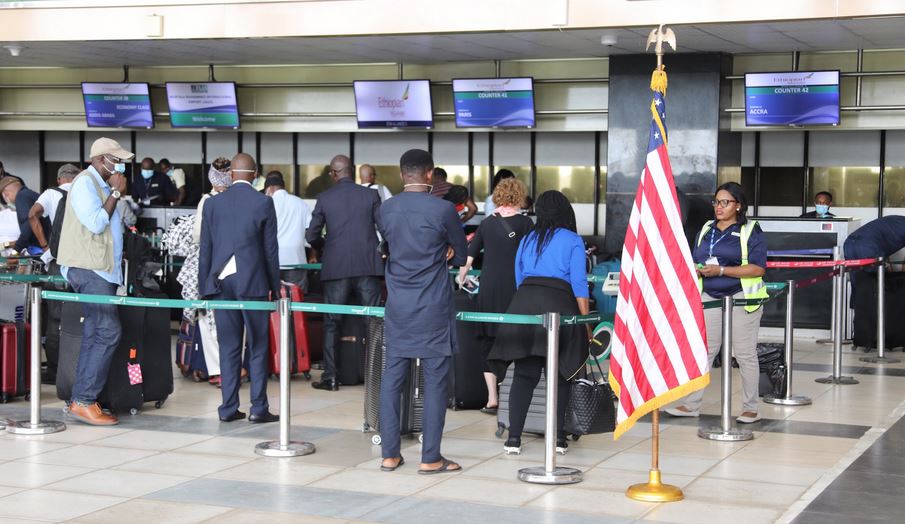 US nationals at the departure wing of MMIA on Monday

No fewer than 997 Americans have been repatriated from Nigeria to the United States as more people get infected with the COVID-19 pandemic, The PUNCH reports.

The US Mission in Nigeria made this known in a statement on Thursday.

The statement noted that 850 Americans were repatriated from April 6 to 8 in addition to the 147 US citizens who departed Abuja on April 4.

It said, “From April 6 to 8, three US Consulate-organised chartered flights operated by Delta Air Lines and Ethiopian Airlines repatriated 850 American citizens from the Murtala Mohammed International Airport Lagos to the United States. This is in addition to the 147 U.S. citizens who departed Abuja on April 4.

“These repatriation flights were made possible by a tremendous effort by the US Consulate team and great cooperation from Nigerian partners, including the Ministry of Aviation, Federal Airport Authority of Nigeria, the Nigeria Immigration Service, and the Lagos State Government.”

The statement also quoted the US Consul General, Claire Pierangelo, as prioritising the safety and security of US citizens overseas.

“This has been three weeks in the making. We had more than 50 people working on this on a daily basis to make sure that we can find the Americans, get the planes, secure flight clearances for the planes to land here and also ensure the safe passage of the Americans traveling to the airport since the city is on lockdown.

“It was an enormous effort and I am incredibly proud of my team. We appreciate all the help from our Nigerian partners. We couldn’t have done this without them,” Consul General Pierangelo said.