A medical doctor whose life was put at risk after a patient infected with coronavirus refused to disclose his travel history. 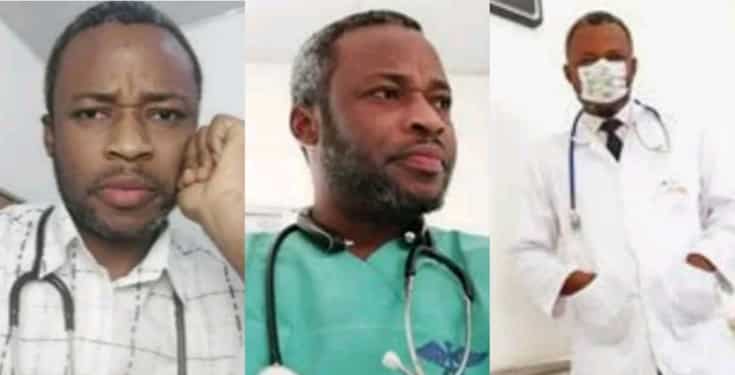 Dr James King
A Nigerian doctor, Dr James King who is practicing in Kano state has finally broken his silence after close contact with the index case of COVID-19 in the state.
Recall that the index case hid his travel history from the doctors when he came in to report a case of fever and headache and in the process, exposed them to the virus.
It was later discovered he had traveled to Germany and the US before arriving Kano state via Abuja on March 25th. The doctors, nurses and a non-medical staff who had contacts with the index case, went into isolation and were tested for the virus. Thankfully, their results came back negative for the virus yesterday.
Dr King shared his own side of the story on social media on Thursday morning.
He wrote:
“I wanted to be silent about this. But since it’s already on Radio and TV stations, ..and the concerns about my health by many who have reached out, …it has become imperative for me to tell my COVID-19 mileu.
Here’s the story…
One Alhaji BZ (not real names initials) came to our hospital.
He had COVID-19.
Unknown to us all.
While evaluating him, he was asked,
“How can we help you sir?”
He replied,
“I’ve been having fever and general body weakness. Please admit me.”
Inquired,
“For how long now?”
He replied
“For some days?
More questions,
“Do you have cough, breathlessness or palpitations?”
Alhaji BZ replied,
“No”, I don’t have any of that.”
Many other medical questions were asked and documented.
Furthermore,
“Did you travel recently?”
He denied,
“No.”
He was further evaluated, examined and admitted into a private room upstairs on Friday evening.
He had contact with two doctors (my boss and I), three nurses and one non-medical staff.
It was unknown to us that he had travelled to Germany, the US before returning to my resident state. Via Abuja travelling by road.
While travelling by road he stayed briefly in Kaduna before arriving to my resident state on the 25th March, 2020.
He lied about all these travel history to us.
He also lied about the pertinent Coronavirus symptoms, ..breathlessness and cough. He also hid the fact that he had been to several medical outlets since his return to the state.
And importantly, he hid the fact that that his samples were taken by NCDC for COVID-19 testing. Ofcourse he denied and lied about all the above in order for him to have our medical care. Putting us all and many others at high risk of the novel pandemic.
We also learnt that during his illness before coming to us, he was attending Friday Mosque prayers, naming ceremonies and other gatherings.
While on admission in our facility, a day after admission being a Saturday, we had a Nollywood-like dramatic entrance into our facilityby health officials with massive Police presence.
The major road our hospital was was blocked and made a Security Restricted area. He was the index case in the state.
The officials told us that we had a man in our facility that just tested positive for COVID-19.
Luckily, my boss, a reknown Neurosurgeon, who was still in theatre while rounding up a delicate Spinal Cord Pedicle Screw Fixation+Laminectomy had to be told.
He derobed. And met the officials.
There was an order from the Governor of the state to lock down the hospital immediately.
The former Ambassador was whisked away to an quarantine centre outskirt of the state.
We were placed on isolation too in our hospital facility.
Samples were taken from our staff for covid-19 testing.
For many days, we could not physically reach our families or anyone.
Isolated up in the hospital.
The waiting began.
Days rolled by.
Anxiety.
All thoughts crept in.
At some point, my boss and I told ourselves that if it’s either positive or negative, we will beat the disease.
Infact we told ourselves that “eventhough its death, we will be dying while in service to humanity.”
When the days rolled by, we began to have some peace.
IInfact we were playing Fela Anipolakuti’s music loudly.
For many days.
Then the tension began.
The result of our COVID-19 will be released in a few more days.
The music volume daily increases. ?
Phones call and prayers from family and friends.
At last the result came out yesterday afternoon.
And it was NEGATIVE for all is us.
We are still waiting to be released from isolation.
Two Police vehicles have been in our gate since all these started.
They were excited yesterday when our result was released and found to be negative.
They are waiting for directives to let us go home.
We thank Almighty God for everything.
We will keep saving lives.
No matter the cost.
Please observe…
#StayingAtHome
#SocialDistancing
#Wash Your Hands Regularly
#Seek Medical Care When Sick"
Top Stories