For lashing out against a state governor who shared stone-filled beans, a woman in Ogun has been arrested. 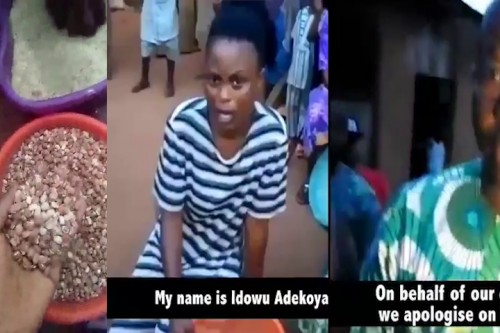 Idowu Adekoya was forced to recant her words after arrest
A woman from Ogun state, Adekoya has been allegedly arrested and forced to apologize after lambasting Governor Dapo Abiodun for instructing state officials to distribute beans filled with stones as part of food items to sustain them during this period.
Expressing the frustrations of many Ogun residents, Adekoya said, “Good evening Nigerians and Ijebu indigenes.
“They want to kill us in Ogun State. They said we should remain at home because of COVID-19 but is this not COVID-25, can’t this kill someone? Kidney problem, liver problem will be caused by this.
“This is not different from what Hausa people pour on the ground for their goats to eat. This is what Governor Dapo Abiodun of Ogun State instructed his commissioners to distribute to us. Is this fair? This is not fair at all.
“Your Excellency, can any of your relatives eat this useless food you instructed to be distributed to us? Will your family eat this? You that wished for Ogun residents to have liver and kidney problem, it is you who would have such.”
According to Sahara Reporters, shortly after recording and releasing the video on the Internet, Adekoya was tracked and allegedly arrested by Ogun State Government officials.
After pleas by community members and influential persons within Ijebu Ode, Adekoya was told to do another video to recant all she earlier said and apologise to Governor Abiodun as a condition for her release.
With no other option left at her disposal, the young lady accepted the offer and recorded a forced apology to the Ogun State governor.
Kneeling outside a house and with people sitting behind her back including an elderly woman, Adekoya said, “Good evening Nigerians, most especially people in Ogun State, in Ijebu Ode. I, Idowu Adekoya, is the one speaking.
“I am the one that did a video on the food distributed in Ijebu Ode earlier.
“Your Excellency sir, I just did that video, I never knew it would turn out this way. I didn’t do it out of malice, do not be angry.
“Elders say that no matter how a child knows how to eat pap, it must rub all over its hand.
“Your Excellency sir, I am very sorry, please don’t be angry at me. We have eaten the said beans, we used it to make Moin-moin (bean pudding).
“No harm shall come near your children, evil shall not befall you, your family and all those close to you. All those working in Ijebu Ode Local Government Council, nothing will happen to them. None of you shall see problem in your lives.”
Watch video below:
Top Stories