See The Number Of Nigerians Who Have Gotten FG's Conditional Cash


The Minister of Humanitarian Affairs, Disaster Management and Social Development, Sadiya Farouq has revealed the number of Nigerians who have benefitted from FG's CCT. 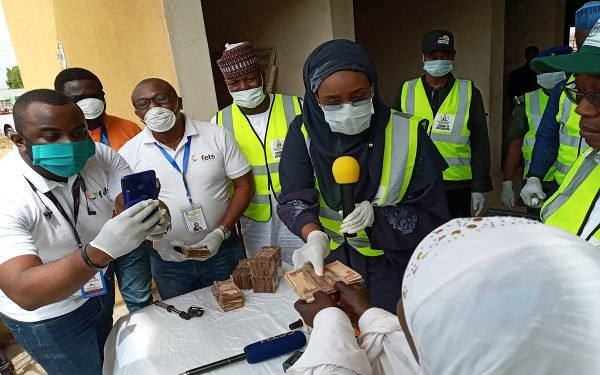 CCT team sharing money to Nigerians
President Muhammadu Buhari administration has given an update on Conditional Cash Transfer (CCT) to Nigerians.
The update was given on Sunday and will not be palatable to some Nigerians especially those who have been condemning the criteria.
The Government announced that of the 428,941 beneficiaries that have received money, 130,455 are from Katsina State.
Minister of Humanitarian Affairs, Disaster Management and Social Development, Sadiya Farouq, spoke at the weekend, during the delivery of three trucks of rice to the Katsina Government.
She also flagged-off the disbursement of TraderMoni and MarketMoni to hundreds of beneficiaries in the state to boost their buinesses.
A statement by her spokesman, Salisu Dambatta, said Faqouq, was represented by the Deputy Director in charge of Disaster Management, Abubakar Sulaiman.
Farouq explained that the TraderMoni is a N10,000 loan to traders that depend on daily income, while the N5,000 MarketMoni is for providers of essential services, including shoe-makers and vulcanisers.
The minister also disclosed that the first phase of the CCT of N20,000 to the poor and vulnerable households in Katsuna state has been concluded.
“As at April 17th, 2020, a total of 428,941 beneficiaries have benefited from the Conditional Cash Transfer in 24 states, with 130,455 of them from Katsina State”, the statement read.
Top Stories