One Million Boys: A Case Of The Poor Robbing The Poor


For some days now, the one million boys armed group have been terrorising residents of Lagos state. 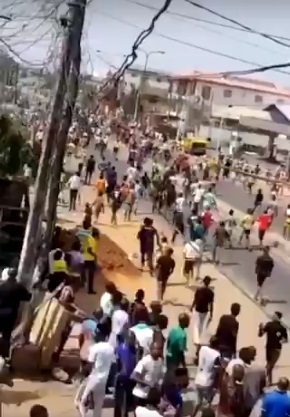 Mushin residents ready for one million boys gang
The last two weeks have been filled with reports of criminal gangs and hoodlums taking to streets and communities assaulting, robbing and raping victims.
The incidents were first heard in Ogun State and then it spiralled to neighbouring Lagos communities sparking fear and panic in residents of these two States.
The reports of the attacks have since been the dominant trending issues on social media since then with hashtags such as #OgunUnrest, #LagosUnrest, #AgegeUnrest and #Surulere.
Reportedly wielding locally-made guns, knives and machetes, these criminals aged between late teens to early 20s and known as the "One Million Boys" have reportedly struck Lagos suburbs including Agege, Ogba, Alagbado, Ikotun-Idimu, Ajegunle and others. In some instances, they have been reported to have sent letters informing neighbourhoods of their imminent attack, demanding that they prepare for them with their monies and valuables.
A friend of mine in the Igando area narrated to me of how the boys came to his neighbourhood in their tens, but for the timely response of the Nigerian Police. In areas where faith in the Police has been lost, the residents have taken it upon themselves to constitute vigilance groups to protect their neighbourhoods as they keep vigil, wield weapons and make bonfires to deter the criminals from impending attacks.
The ‘One Million Boys’ are not the only criminal gangs carrying out these atrocious criminal acts in these areas. According to the Police, following the arrests of hundreds, other gangs were identified and they claimed ridiculous names such as Awawa Boys, Sahara Boys, Lemon Boys, Federal Boys, Ilena Boys, Marindoti Boys.
One can not help but wonder what could have caused the sudden upsurge in the activities of these criminal gangs. Could the on-going lockdown which has since restricted people from going about their normal daily activities have been responsible? Could the lack and hunger that is existing in these two states since the lockdown order have caused these boys to revolt and choose to take from others what they don't have?
Following the outbreak of the deadly Coronavirus, the Federal Government had ordered a total lockdown of Ogun, Lagos and Abuja since these locations have had the highest number of confirmed cases of the virus. The lockdown which was ordered as a precautionary measure to help contain the spread of the virus put a halt to social and economic activities, leaving many to either fend with whatever they might have saved, beg for government palliatives or explore other legal or illegal options to survive.
The One Million Boys is not a new criminal group as we can vividly remember the terror they inflicted in the Badagry area of Lagos a few years ago. They were reported to have looted, maimed and killed residents until the Police were able to curb their activities. Even with the Police intervention, it cannot be claimed that they totally went underground without operating since then. Obviously, they continued to exist, but on a low scale until recently.
The sudden upsurge in their activities may have been as a result of the prevailing hunger that exists as a result of the lockdown. Several of them that had been preoccupied as street urchins and motor-park touts otherwise known as ‘Agberos’ seem to be out of jobs with no legal source of income in the lockdown. This is not to make an excuse for crime or criminals. Crime is crime and should be totally abhorred since it is only a lazy man’s option out of poverty. That being said, we can not ignore the link between the sudden spike in activities of these criminal gangs and the hunger that came with the lockdown.
These boys are angry with the government but have instead chosen to take it out on fellow citizens who are enduring the same economic predicament as them. The places these criminals are attacking are inhabited by people who are in the same economic class as they. Citizens who have also been neglected by the government and in the majority earn less than the poverty mark.
It would have been better they took their anger out on the rich political class and leaders who have robbed the country blind and that have kept us impoverished for so many years. Leaders who refused to invest in our education, equip our hospitals and provide enabling environment for jobs to be created.
Hopefully, the current wave of insecurity will soon pass, but that is not to say there will not be a resurgence in the future if things remain the same. Let's pray that the impending recession that has been predicted to come in the aftermath of the OVID-19 pandemic does not force a revolution that will force the country into a turmoil.
Written by Victor Enengedi
[email protected]
Top Stories