A lady took to Twitter to reveal that runs girls actually gets married before the church girls. 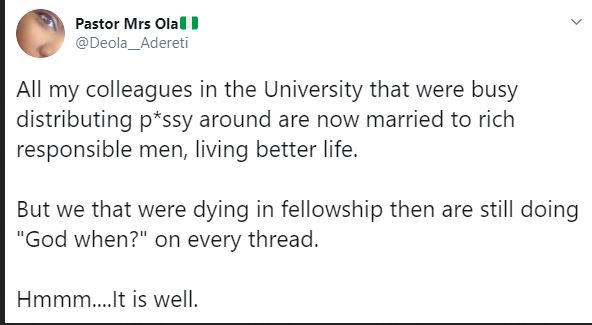 A lady's tweet is trending on social media after she complained about not getting any good man despite being a ''fellowship girl'' during her University days.

According to the Twitter user, Deola__Adereti, all her classmates during her Univeristy days that were ''sleeping around'' are now married to rich responsible men while she and others who were strong christians are still asking God to bless them with husbands.

She tweeted 'All my colleagues in the University that were busy distributing p*ssy around are now married to rich responsible men, living better life.

But we that were dying in fellowship then are still doing "God when?" on every thread.Hmmm....It is well.''

In another follow up tweet, she said; ''I did everything I was asked to oo. Sometimes I will think I'm being punished for something I don't know. E get this babe that was doing this runs lojumejeji back then, gIrl got married to one local govt chairman. How she managed to find the guy still baffles me.''

Some Twitter users supported her tweets saying it's not good to judge as most times it's the 'bad ones' who do well in life. Others didn't support her notion, stating that some of these ''run girls'' are in bad marriages, to which she replied  ''All of you coming with "their marriage might not be rosy" agenda, go and sit down. Most of them actually have happy marriages. I know of 4 like that. That agenda is fallacious.''